Items related to The Heat's On (Penguin Modern Classics)

The Heat's On (Penguin Modern Classics) 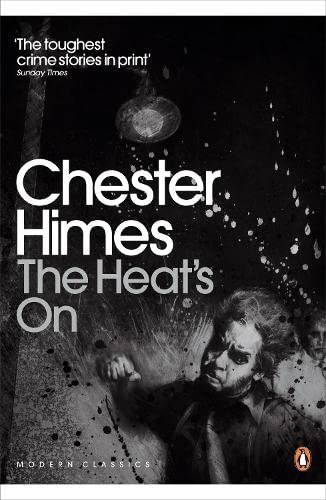 Detectives Coffin Ed and Grave Digger Jones have lost two criminals. Pinky ran off - but it shouldn't be hard to track down a giant albino in Harlem. Jake the dwarf drug dealer, though, isn't coming back - he died after Grave Digger punched him in the stomach. And the dwarf's death might cost them both their badges. Unless they can track down the cause of all this mayhem - like the African with his throat slit and the dog the size of a lion with an open head wound.

Chester Himes's hardboiled tales of Harlem have a barely contained chaos and a visceral, macabre edge all their own.

With a new Introduction by Noel 'Razor' Smith.

Chester Himes is one of the towering figures of the black literary tradition. His command of nuances of character and dynamics of plot is preeminent among writers of crime fiction. He is a master craftsman. (Henry Louis Gates, Jr.)

A fantasia with a hard brilliant core (Evening Standard)

Chester Himes is the great lost crime writer, as well a great American dissident novelist per se, and an essential witness to his times. Every one of his beyond-cool Harlem novels is cherished by every reader who finds it. (Jonathan Lethem)

He belongs with those great demented realists ... whose writing pitilessly exposes the ridiculousness of the human condition (Will Self)

That he could channel this pain and misery into some of the greatest crime novels ever written is a testament to his skill as a writer and his spirit as a man. If this is the first Chester Himes novel you will read then, believe me, you are in for a treat. (Noel "Razor" Smith)

Chester Himes was born in Jefferson City, Missouri in 1909 and grew up in Cleveland.

Aged 19 he was arrested for armed robbery and sentenced to 20 to 25 years in jail. In jail he began to write short stories, some of which were published in Esquire.

Upon release he took a variety of jobs from working in a California shipyard to journalism to script-writing while continuing to write fiction. He later moved to Paris where he was commissioned by La Série Noire to write the first of his Harlem detective novels, La reine des pommes/A Rage in Harlem, which won the 1957 Grand Prix du Roman Policier. In 1969 Himes moved to Spain, where he died in 1984.

1. Modern Classics The Heat's On

Book Description Penguin Classic, 2011. Condition: Good. Shows some signs of wear, and may have some markings on the inside. Seller Inventory # GRP82040319

Book Description Penguin Classic, 2011. Condition: Good. A+ Customer service! Satisfaction Guaranteed! Book is in Used-Good condition. Pages and cover are clean and intact. Used items may not include supplementary materials such as CDs or access codes. May show signs of minor shelf wear and contain limited notes and highlighting. Seller Inventory # 0141196475-2-4