Items related to The Dig 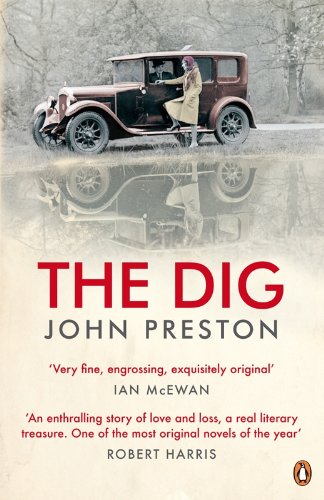 In the long hot summer of 1939 Britain is preparing for war. But on a riverside farm in Suffolk there is excitement of another kind: Mrs Petty, the widowed farmer, has had her hunch proved correct that the strange mounds on her land hold buried treasure. As the dig proceeds against a background of mounting national anxiety, it becomes clear though that this is no ordinary find ... And pretty soon the discovery leads to all kinds of jealousies and tensions. John Preston's recreation of the Sutton Hoo dig - the greatest Anglo-Saxon discovery ever in Britain - brilliantly and comically dramatizes three months of intense activity when locals fought outsiders, professionals thwarted amateurs, and love and rivaly flourished in equal measure

An enthralling story of love and loss, a real literary treasure. One of the most original novels of the year (Robert Harris)

You don't need to be in archaeology - this is a tale of rivalry, loss and thwarted love. It's so absorbing that I read right through lunchtime one day, and it's not often I miss a meal (Nigella Lawson)

A rich vein of dry humour runs throughout (Evening Standard)

A moving novel that coheres wonderully as it progresses (Spectator)

A delicate evocation of a vanished era (Sunday Times)

Wonderful, evocative. From this simple tale of dirt, Preston has produced the finest gold. He keeps an iron grip on the reader's attention (Observer)

Beatutifully written...there is a true and wonderful ending to the story (Bill Wyman Mail on Sunday)

John Preston is a former Arts Editor of the Evening Standard and the Sunday Telegraph. For ten years he was the Sunday Telegraph's television critic and one of its chief feature writers. He is the author of a travel book and four novels. His most recent novel, The Dig, was published to great acclaim in 2007.

Book Description Paperback. Condition: Very Good. The book has been read, but is in excellent condition. Pages are intact and not marred by notes or highlighting. The spine remains undamaged. Seller Inventory # GOR001256965

Book Description Paperback. Condition: Good. The book has been read but remains in clean condition. All pages are intact and the cover is intact. Some minor wear to the spine. Seller Inventory # GOR001353736

Book Description Paperback. Condition: Fair. A readable copy of the book which may include some defects such as highlighting and notes. Cover and pages may be creased and show discolouration. Seller Inventory # GOR001504263

Book Description Penguin, 2008. Paperback. Condition: Very Good. Very Good: a copy that has been read, but is in excellent condition. Pages are intact and not marred by notes or highlighting. The spine remains undamaged. Most items will be dispatched the same or the next working day. Seller Inventory # wbb0015019470

Book Description Penguin, 2008. Paperback. Condition: Good. Good condition is defined as: a copy that has been read but remains in clean condition. All of the pages are intact and the cover is intact and the spine may show signs of wear. The book may have minor markings which are not specifically mentioned. Most items will be dispatched the same or the next working day. Seller Inventory # wbb0015024495

Book Description Penguin UK, 2008. Condition: Good. A+ Customer service! Satisfaction Guaranteed! Book is in Used-Good condition. Pages and cover are clean and intact. Used items may not include supplementary materials such as CDs or access codes. May show signs of minor shelf wear and contain limited notes and highlighting. Seller Inventory # 0141016388-2-4