Items related to The New Penguin Dictionary of Music

The New Penguin Dictionary of Music 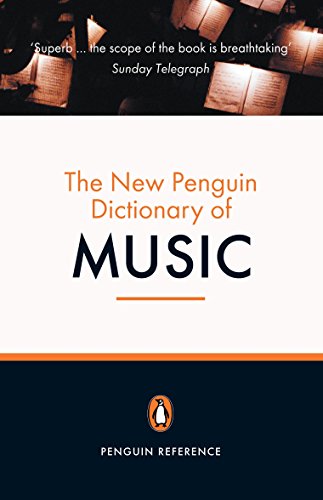 The New Penguin Dictionary of Music is the essential A-Z of some 1,000 years of Western music. It explores in detail the lives and achievements of a huge range of composers, and examines such key topics as music history (from medieval plainchant to contemporary minimalism), performers, theory and jargon. Written by an award-winning music critic, and blending scholarship with personal insight and opinion, this dictionary is both a pleasurable read and an invaluable and authoritative reference book for all lovers of music, whether amateur or professional.

(It., little goose). Small wind instrument, normally oval in shape and made of terracotta or plastic, with holes for mouth and fingers. It is found worldwide, but only in very few classical scores (e.g. Ligeti's Violin Concerto).

(Ger. Quintenzirkel). Imaginary wheel of the 12 notes or tonalities stepping in equal-tempered fifths: C, G, D, A, E, B, F#/Gb, C#/Db, Ab, Eb, Bb, F, and so on back to C. Because modulation though a fifth is straightforward, passages in diatonic music often move around an arc of fifths - or even, in two early preludes by Beethoven (Op.39), the entire circle.

(b. Rome/Florence, 20 Aug 1561; d. Florence, 12 Aug 1633). Italian composer, one of the founders of opera. After studies with Cristoforo Malvezzi he served the Medicis, composing and singing in the new style of expressive monody. His and Corsi's setting of Rinuccini's Dafne, performed in 1598, is the earliest recorded opera; nearly all its music is lost. He set a second such piece for the marriage in 1600 of Henry IV of France and Marie de' Medici, Euridice, to which Caccini added music. Both composers then completed their own versions. His later music includes further dramatic works and oratorios, of which little survives, and songs.

A Selection of Sample Entries:

'Aston, Hugh (b. c.1485; buried Leicester, 17 Nov 1558). English composer and church musician. He was active in Leicester by 1525, having previously been in Coventry and perhaps London. His works include sacred works and a striking keyboard piece, A Hornepype'.

'asymmetry. Applied to music, the term usually denotes lack of rhythmic regularity, whether due to changing metre, cross-rhythm or absence of stable pulse'.

'Athalia. Oratorio by Handel to words by Samuel Humphreys after Racine's play. Athalia (soprano), queen of Judah, has deserted Jehovah for Baal, and is supplanted by her grandson Joas (treble) at the behest of his aunt Josabeth (soprano) and her husband, the high-priest Joad (countertenor). First performance: Oxford, 10 Jul 1733'.

1. The New Penguin Dictionary of Music

2. The New Penguin Dictionary of Music