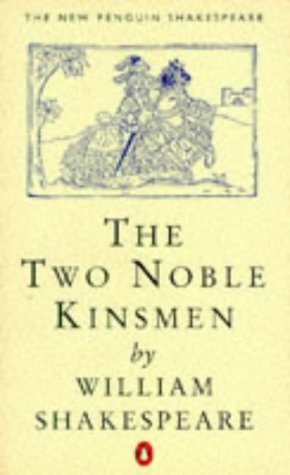 Part of "The New Penguin Shakespeare" series, this text looks at "The Two Noble Kinsmen" with an introduction, a list of further reading, commentary and a short account of the textual problems of the play. The series is used and recommended by the Royal Shakespeare Company.

Shakespeare's last dramatic work, Two Noble Kinsmen has often been marginalised by editors who believe that Shakespeare was just one of its many writers. This does a disservice to what is a fascinating and haunting play. The two noble kinsmen of the play's title are Palamon and his cousin Arcite, Thebans who have sworn a vow of friendship until death, claiming, "Is there record of any two that loved/Better than we do?" King Theseus of Athens leads an invasion against Thebes, and returns to Athens with the two cousins, who both fall in love with Princess Emilia, Theseus' sister-in-law. Both become rivals for Emilia's hand, incurring the wrath of Theseus. The action moves to the forest, where Palamon and Arcite prepare to duel over Emilia, only to be interrupted by Theseus, who delays the duel for one month, commanding that whoever wins the duel will marry Emilia, whilst the loser will be executed. On the day Arcite defeats Palamon, but is then crushed under his own horse. As he dies he bequeaths Emilia's hand to his cousin. The play ends with their wedding ceremony. Two Noble Kinsmen concludes with a note of resignation, as Theseus says "Let us be thankful/For that which is, and with you leave dispute/That are above our question", but as always, it is dangerous to see this as Shakespeare pronouncing on life itself, or simply another character in one of his plays voicing a particularly elegiac viewpoint on the sad events portrayed. --Jerry Brotton