Items related to The Way of All Flesh (Penguin Popular Classics)

Butler, Samuel The Way of All Flesh (Penguin Popular Classics)

The Way of All Flesh (Penguin Popular Classics) 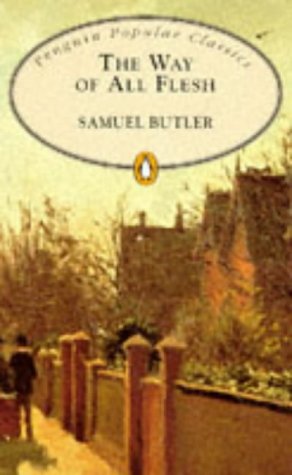 Samuel Butler was one of the Victorian era's greatest iconoclasts. Once, he said that after reading Darwin's "The Origin of Species," that the theory of evolution had replaced Christianity for him. And this -- after Butler had originally studied for the clergy. Darwin also praised Butler for his clear understanding of Darwin's scientific work, as expressed in a series of popular articles contributed to the "Canterbury Press." Butler's first literary success came in the form of the 1872 novel "Erewhon," a work that was originally published anonymously, but which was an immediate popular and critical success in its satire of Victorian English mores and customs ("Erewhon" is "Nowhere" spelled backward). After "Erewhon," Butler began writing the first draft of "The Way of All Flesh," but put it aside after realizing that the scathing, autobiographical nature of the story would deeply hurt other family members. "The Way of All Flesh" was eventually published in 1903. It tells the story of Ernest Pontifex, based upon Butler himself, and his struggles with Victorian mores, his restrictive, highly-religious family, and Victorian society itself. Butler is remembered as one of the greatest of the anti-Victorians, whose ideas reflected accurately the new, more liberal society that was to come following the death of England's great Queen, and the beginning of a new era.

It is read, I believe, mostly by the young, bent on making out a case against their elders, but Butler was fifty when he stopped working on it, and no reader much under that age is likely to appreciate the full beauty of its horrors. . . . Every contemporary novelist with a developed sense of irony is probably in some measure, directly or indirectly, indebted to Butler, who had the misfortune to be a twentieth-century man born in the year 1835 --The New Yorker

SAMUEL BUTLER (1835-1902), the freethinking iconoclast whom George Bernard Shaw deemed the greatest English writer of the latter half of the nineteenth century, also satirized Victorian society in Erewhon (1872) and Erewhon Revisited (1901). His work strongly influenced such writers as Virginia Woolf, E. M. Forster, and James Joyce.

1. THE WAY OF ALL FLESH (PENGUIN PO

2. The Way of All Flesh (Penguin Popular Classics) Butler, Samuel