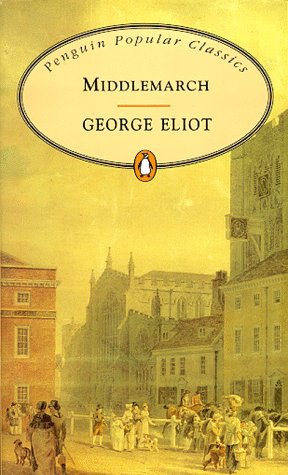 This title is part of an inexpensive range of classics in the "Penguin Popular Classics" series.

"No Victorian novel approaches Middlemarch in its width of reference, its intellectual power, or the imperturbable spaciousness of its narrative [...] I doubt if any Victorian novelist has as much to teach the modern novelists as George Eliot [...] No writer has ever represented the ambiguities of moral choice so fully." - V. S. Pritchett "The 10 Greatest Books of All Time" - BBC's The Big Read

In Middlemarch George Eliot gives us a portrait of provincial life in Victorian England that has never been surpassed.

Wit, irony, pathos and brilliant insight into human nature colour every strand of plot and every beautifully drawn character. Foremost among these and Dorothea Booke, passionate to use her spirit and talent in a wider world than that typically afforded to women in the 1830s; Casuabon, the dry, jealous academic; Doctor Lydgate, who dreams of pioneering research in medical science; spoilt, pretty Rosamond Vincy who sees as 'a man whom it would be delightful to enslave'.

The novel centres on the marriages of Dorothea and of Lydgate, and on the web of relationships that connects us to each other. While eagerly awaiting the next part of the Middlemarch serial in 1872, the Spectator critic declared that 'Middlemarch bids more than fair to be one of the great books of the world'.