Items related to Death of a Salesman: Certain Private Conversations...

Death of a Salesman: Certain Private Conversations in Two Acts And a Requiem (Penguin Plays & Screenplays) 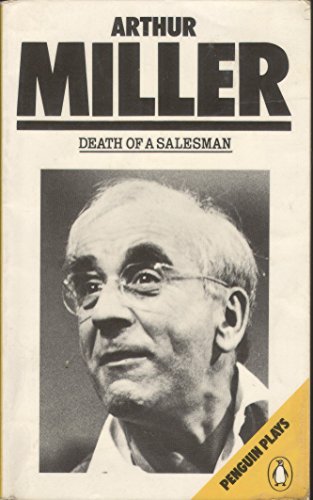 Arthur Miller's 1949 Death of a Salesman has sold 11 million copies, and Willy Loman didn't make all those sales on a smile and a shoeshine. This play is the genuine article--it's got the goods on the human condition, all packed into a day in the life of one self-deluded, self-promoting, self-defeating soul. It's a sturdy bridge between kitchen-sink realism and spectral abstraction, the facts of particular hard times and universal themes. As Christopher Bigsby's mildly interesting afterword in this 50th-anniversary edition points out (as does Miller in his memoir, Timebends), Willy is closely based on the playwright's sad, absurd salesman uncle, Manny. But of course Miller made Manny into Everyman, and gave him the name of the crime commissioner, Lohmann, in Fritz Lang's angst-ridden 1932 Nazi parable, The Testament of Dr. Mabuse.

The tragedy of Loman the all--American dreamer and loser--works eternally, on the page as on the stage. A lot of plays made history around 1949, but none have stepped out of history into the classic canon as Salesman has. Great as it was, Tennessee Williams' work can't be revived as vividly as this play still is, all over the world. (This edition has edifying pictures of Lee J. Cobb's 1949 and Brian Dennehy's 1999 performances.) It connects Aristotle, The Great Gatsby, On the Waterfront, David Mamet, and the archetypal American movie antihero. It even transcends its author's tragic flaw of pious preachiness (which undoes his snoozy The Crucible, unfortunately his most-produced play).

No doubt you've seen Willy Loman's story at least once. It's still worth reading.--Tim Appelo, Amazon.com

This is a remarkable document. First and foremost, it is, of course, the reactions of a superior stage craftsman, but more, of a highly sensitive and thoughtful citizen of the world, to the spectacle of China today.
- New York Times

Very few people write well about the art of directing a play. Miller, however, has a specific and intricate problem to explain: how you direct, listening to your own play coming across in a language you cannot hope to understand . . . The result, then, is not merely the lucid diary of a unique production in China; it is also a very clear account of the kind of process any production might go through, and of the thoughts running through the mind of any considerate director.
- The Times

It is not just a record of a slightly eccentric theatrical venture. It ranges back to the author's experience as a liberal in postwar America; and forward to thoughts about China . . . This is a memorable book, full of observation and fun to read. --- Economist

2. DEATH OF A SALESMAN (PENGUIN PLA