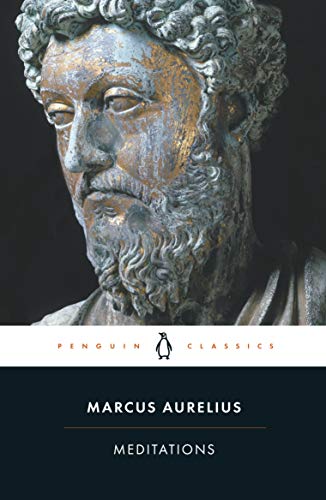 Written in Greek by an intellectual Roman emperor without any intention of publication, the Meditations of Marcus Aurelius (AD 121-180) offer a wide range of fascinating spiritual reflections and exercises developed as the leader struggled to understand himself and make sense of the universe. Spanning from doubt and despair to conviction and exaltation, they cover such diverse topics as the question of virtue, human rationality, the nature of the gods and Aurelius's own emotions. But while the Meditations were composed to provide personal consolation, in developing his beliefs Marcus also created one of the greatest of all works of philosophy: a series of wise and practical aphorisms that have been consulted and admired by statesmen, thinkers and ordinary readers for almost two thousand years.

Written in the mid second century by the philosopher Emperor Marcus Aurelius, Meditations presents a noble approach to life. Schooled in the classic tradition, Marcus Aurelius reflects the mature harvest of the Stoic school of philosophy. His philosophy is best summed up by the saying "Do not be too concerned, for tomorrow you die". Lest this sounds too bleak, the awareness of mortality motivates a good, noble and upright life. Since we all die, the best thing is to live nobly and honestly. This is not only the way to live well, but also the way to avoid suffering. Meditations is composed of aphorisms and insights from Marcus Aurelius that allow his philosophy to be lived out.

The translator, Gregory Hays, is assistant professor of classics at the University of Virginia. Hays provides a clearly written introduction in which he explains the philosophical influences on Marcus Aurelius as well as the political and familial pressures he experienced. The translation itself is crisp and lucid. The result is a handsome collection of short exhortations and aphorisms that encourage a noble, if stoical approach to life. Marcus Aurelius always sheds light on life, but that light is always dappled with shadow. There is no hope and little humour in Marcus Aurelius. In the end, his outlook is pessimistic, and he makes one realise how refreshing and unique the Christian virtues of faith, hope and charity really are. Nevertheless, Meditations is a cornerstone of the practical philosophy genre and this new translation will make up a vital part of a classic bookshelf. --Dwight Longenecker

Martin Hammond's translation of Marcus Aurelius' Meditations, like his Iliad and Odyssey, is the work of an unusually gifted translator, and one who understands the value added by careful attention to supplementary material. He writes natural English, direct and often eloquent; the text is well supported by effective notes and a characteristically thorough and well-planned index; Diskin Clay supplies a useful introduction. This is a fine volume (Malcolm Heath Greece & Rome Journal)

Marcus is well served by this new translation. Hammond has a pithy turn of phrase to match the emperor's own . . . His notes abound in helpful explanation and illuminating cross-reference. Diskin Clay contributes a sparkling and sympathetic introduction. The combination of introduction, translation and notes is as good as they get (John Taylor Journal of Classics Teaching)