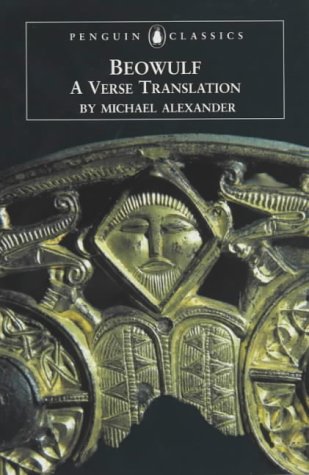 BEOWULF stands at the head of English literature; a poem of historical interest and epic scope. Although the first manuscript of BEOWULF dates from around the year 1,000, it is thought that the poem existed in its present form from the year 850.Beowulf's adventures themselves stand in front of the wide historical canvas of 5th and 6th century Scandinavia. Against this heroic background of feuding and feasting, Beowulf first kills the monster Grendel and her mother, and later defends his people against a dragon in a battle that leaves them both mortally wounded.

One of the most universally studied of the English classics, Beowulf is considered the finest heroic poem in Old English. Written ten centuries ago, it celebrates the character and exploits of Beowulf, a young nobleman of the Geats, a people of southern Sweden.

Beowulf first rescues the royal house of Denmark from two marauding monsters, then returns to rule his people for 50 years, ultimately losing his life in a battle to defend the Geats from a dragon's rampage. The poem combines mythical elements, Christian and pagan sensibilities, and actual historical figures and events in a narrative that ranges from vivid descriptions of fierce fighting and detailed portrayals of court life to earnest considerations of social and moral dilemmas. Originally written in Old English verse, it is presented here in an authoritative prose translation by R.K. Gordon.

Michael Alexander is Berry Professor of English Literature at the University of St Andrews. For Penguin he has translated, 'The Earliest English Poems', 'The Canterbury Tales: The First Fragment', as well as a prose translation of BEOWULF.