Items related to Murder Trials: 'In Defence of Sextus Roscius of... 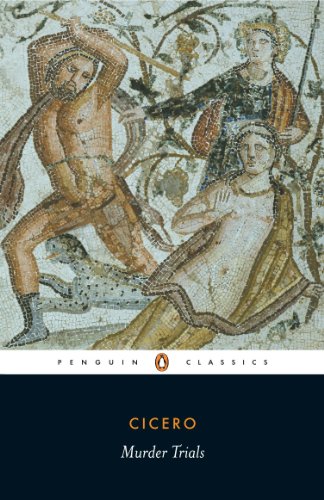 An accomplished poet, philosopher, rhetorician, and humorist, Marcus Tullius Cicero (106 BC-43 BC) was also the greatest forensic orator Rome ever produced. But to Cicero, service to the res publica (literally, "the public affair") was a Roman citizen's highest duty. At age 26 (in 80 BC), he successfully defended a man prosecuted unjustly by a crony of the bloodthirsty dictator Sulla. In 69 BC, he brought to order the corrupt Sicilian governor Verres. As consul in 63 BC, he put down the Catilinarian conspiracy; later, he was sent into exile for refusing to join the First Triumvirate. Late in life, he led the Senate's gallant but unsuccessful battle against Antony, for which he paid with his life on 7 December 43 BC.

Cicero was still in his twenties when he got Sextus Roscius off a charge of murdering his father and nearly sixty when he defended King Deiotarus, accused of trying to murder Caesar. In between (with, among others, his speeches for Cluentius and Rabirius), he built a reputation as the greatest orator of his time.Cicero defended his practice partly on moral or compassionate grounds of 'human decency'--sentiments with which we today would agree. His clients generally went free. And in vindicating men--who sometimes did not deserve it--he left us a mass of detail about Roman life, law and history and, in two of the speeches, graphic pictures of the 'gun-law' of small provincial towns.