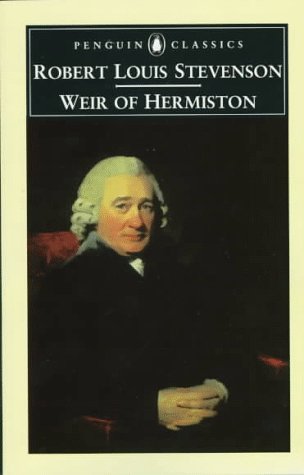 In Stevenson's tale of father - son confrontation, the father, Adam Weir, is modelled on Lord Braxfield, the eighteenth-century 'hanging judge'. Weir, a 'risen man' who has married a wealthy but weak woman, is both feared and respected, not least by his own son, Archie. At a public hanging, Archie speaks out against capital punishment, knowing that it was his own father who sentenced the man. He is banished to their estate at Hermiston outside Edinburgh, where he meets and falls in love with Christina Elliot, the daughter of the local laird. She is his social inferior, however, and Archie is afraid to tell his father of their attachment. But then Frank Innes arrives on the scene, a friend who sparks off events which will lead to Archie's death. But the novel is unfinished. Stevenson was working on Weir the day he died. How would he have finished the plot? There is no definite answer, but previously unpublished material does throw new light on this tale of Scottish 'public and domestic' history.

Robert Louis Stevenson was born in Edinburgh in 1850. The son of a prosperous civil engineer, he was expected to follow the family profession but was finally allowed to study law at Edinburgh University. Stevenson reacted forcibly against the Presbyterianism of both his city's professional classes and his devout parents, but the influence of Calvinism on his childhood informed the fascination with evil that is so powerfully explored in Dr Jekyll and Mr Hyde. Stevenson suffered from a severe respiratory disease from his twenties onwards, leading him to settle in the gentle climate of Samoa with his American wife, Fanny Osbourne.