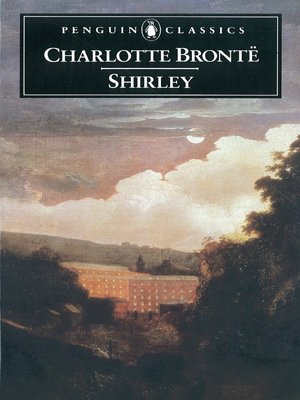 Struggling manufacturer Robert Moore has introduced labour saving machinery to his Yorkshire mill, arousing a ferment of unemployment and discontent among his workers. Robert considers marriage to the wealthy and independent Shirley Keeldar to solve his financial woes, yet his heart lies with his cousin Caroline, who, bored and desperate, lives as a dependent in her uncle's home with no prospect of a career. Shirley, meanwhile, is in love with Robert's brother, an impoverished tutor - a match opposed by her family. As industrial unrest builds to a potentially fatal pitch, can the four be reconciled? Set during the Napoleonic wars at a time of national economic struggles, Shirley (1849) is an unsentimental, yet passionate depiction of conflict between classes, sexes and generations.

Following the tremendous popular success of Jane Eyre, which earned her lifelong notoriety as a moral revolutionary, Charlotte Bronte vowed to write a sweeping social chronicle that focused on "something real and unromantic as Monday morning". Set in the industrializing England of the Napoleonic wars and Luddite revolts of 1811-12, Shirley (1849) is the story of two contrasting heroines. One is the shy Caroline Helstone, who is trapped in the oppressive atmosphere of a Yorkshire rectory and whose bare life symbolizes the plight of single women in the nineteenth century. The other is the vivacious Shirley Keeldar, who inherits a local estate and whose wealth liberates her from convention. A work that combines social commentary with the more private preoccupations of Jane Eyre, Shirley demonstrates the full range of Bronte's literary talent.

Charlotte Bronte (1816-55) is perhaps the most admired of the Bronte sisters. Jane Eyre is her greatest and most loved novel.