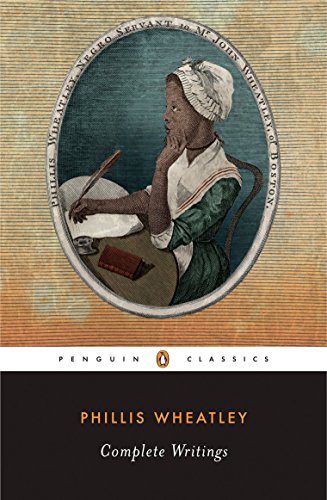 A full and rich collection of Wheatley's poetry and writings: from letters and tales, to hymns and elegies, translations and philosophical poems. With her contemplative elegies and her use of the poetic imagination to escape an unsatisfactory world, Wheatley anticipated the Romantic Movement of the following century, while shedding light on the injustice of her condition.

"What a marvelous edition of Phillis Wheatley's COMPLETE WRITINGS Vincent Carretta has produced for Penguin Classics. Here are all her poems including extant verse not included in her first volume as well as variants of others. Here are also her letters and the important proposals for her volumes of poetry. Additionally, Carretta has added work by her black contemporaries Lucy Terry Prince, Jupiter Hammon, and Francis Williams to help readers contextualize black literary activity in the late eighteenth century. Carretta has also written an illuminating introduction and included suggestions for further read and notes. In short, this is a fantastic edition for the specialist, the student, and the informed general reader. It will be widely used." --Kathryn Zabelle Derounian-Stodola, Univ of Arkansas at Little Rock

"Vincent Carretta's edition of the works of Phillis Wheatley is the definitive collection of her work. Expertly edited, it is a masterpiece of textual scholarship. Every scholar and student seeking to understand Wheatley's life and work will want to obtain this book." --Henry Louis Gates

Phyllis Wheatley (1753-1784) was taken from western Africa to Boston by the slave ship Phillis in 1761. Recognising her talent, her owners gave her an education and Wheatley became an internationally known poet before the age of twenty, the first published woman of African descent.
Vincent Carretta is professor of English at the University of Maryland, College Park. He has edited the Penguin Classics editions of the work of Olaudah Equiano, Igniatius Sancho and Ottobah Cugoano.

Book Description Paperback. Condition: New. Language: English. Brand new Book. The extraordinary writings of Phillis Wheatley, a slave girl turned published poetIn 1761, a young girl arrived in Boston on a slave ship, sold to the Wheatley family, and given the name Phillis Wheatley. Struck by Phillis' extraordinary precociousness, the Wheatleys provided her with an education that was unusual for a woman of the time and astonishing for a slave. After studying English and classical literature, geography, the Bible, and Latin, Phillis published her first poem in 1767 at the age of 14, winning much public attention and considerable fame. When Boston publishers who doubted its authenticity rejected an initial collection of her poetry, Wheatley sailed to London in 1773 and found a publisher there for Poems on Various Subjects, Religious and Moral.This volume collects both Wheatley's letters and her poetry- hymns, elegies, translations, philosophical poems, tales, and epyllions--including a poignant plea to the Earl of Dartmouth urging freedom for America and comparing the country's condition to her own. With her contemplative elegies and her use of the poetic imagination to escape an unsatisfactory world, Wheatley anticipated the Romantic Movement of the following century. The appendices to this edition include poems of Wheatley's contemporary African-American poets- Lucy Terry, Jupiter Harmon, and Francis Williams.For more than seventy years, Penguin has been the leading publisher of classic literature in the English-speaking world. With more than 1,700titles, Penguin Classics represents a global bookshelf of the best works throughout history and across genres and disciplines. Readers trust theseries to provide authoritative texts enhanced by introductions and notes by distinguished scholars and contemporary authors, as well as up-to-datetranslations by award-winning translators. Seller Inventory # BZE9780140424300

Book Description Paperback. Condition: new. Paperback. A full and rich collection of Wheatley's poetry and writings: from letters and tales, to hymns and elegies, translations and philosophical poems. With her contemplative elegies and her use of the poetic imagination to escape an unsatisfactory world, Wheatley anticipated the Romantic Movement of the following century, while shedding light on the injustice of her condition. A collection of writings by the eighteenth-century slave and author includes her letters, poetry, short fiction, and essays, along with poetry by such contemporary African American poets as Lucy Terry, Jupiter Harmon, and Francis Williams. Shipping may be from multiple locations in the US or from the UK, depending on stock availability. Seller Inventory # 9780140424300