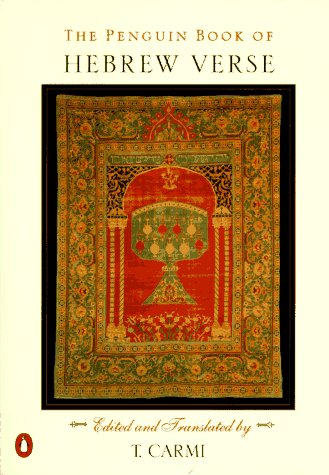 This collection gathers the riches of Hebrew verse from the Bible to contemporary Israeli writings. It draws on journals, rare editions, and liturgical collections from all over the world.

T. Carmi (1925 - 1994; b. New York, USA) was brought up in one of the few Hebrew-speaking American households. His first Hebrew poems were published while he still lived in the US. He studied at Yeshiva and Columbia Universities, and in 1946 worked with Jewish war orphans in France. He immigrated to Eretz Israel in 1947 and settled in Jerusalem after fighting in the War of Independence. An editor and translator (of Shakespeare, among others), he was a regular visiting professor at the Jerusalem Hebrew Union College. In addition to publishing his own poetry, he translated and edited two volumes of Hebrew poetry, including The Penguin Book of Hebrew Verse. He was awarded numerous literary prizes, including the Bialik Prize.

The Penguin Book of Hebrew Verse.

The Penguin Book of Hebrew Verse (English and Hebrew Edition)

THE PENGUIN BOOK OF HEBREW VERSE