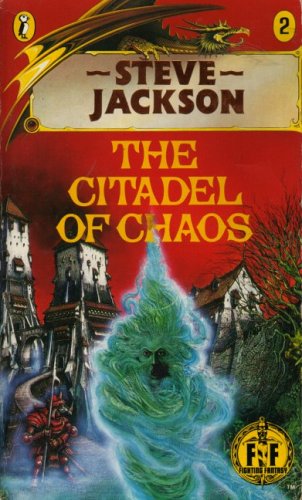 Wizard Books are proud to announce the return of the children's book sensation of the 1980s: Steve Jackson and Ian Livingstone's Fighting Fantasy.

The first ever Fighting Fantasy gamebook, Warlock of Firetop Mountain, was originally published in 1982. It became an overnight bestseller, and went on to sell 2 million copies. The series "captured the imaginations of a whole generation of teenage boys," reached 59 titles and sold in excess of 15 million books around the world

Fighting Fantasy inspired a legion of fans in the 1980s and is set to take over the world once again. Relauched with a dazzling new 21st-century look, Wizard will publish 6 titles in 2002. The first print run of each of the books published in 2002 contain very special, never-to-be-repeated collector's features so - begin your collection today!

It all started in 1980 at Games WorkshopÆs annual Games Day exhibition at the Royal Horticultural Hall in London. Penguin Books had taken a stand to promote a new book called Playing Politics. Steve Jackson and Ian Livingstone, the young founders of Games Workshop tried to persuade Penguin to publish a book on the growing Fantasy Role-Playing (FRP) hobby. She invited them to send in a synopsis.

This was to be a sort of æhow to do itÆ manual; an introduction to the world of FRP games. But the pair came up with a much more interesting idea. Why not a simple solo role-playing game presented within the pages of a book? This would get the concept over much more effectively than a dull manual. They would create an individual quest in which the reader becomes the hero of his own adventure, using the mechanic of jumbled paragraphs and a simple dice-based combat system. And so, under its working title, The Magic Quest, the gamebook concept came into being.

When Penguin received the synopsis of The Magic Quest, she didnÆt quite know what to make of it. Was it a book? Or a game? Was it for children? Or for adults? The manuscript passed around Penguin editors for a year before a decision was finally made to publish The Magic Quest.

Steve & Ian now had to turn their idea into a reality. Writing a synopsis was one thing, but a whole adventure was something entirely different. And as they also had Games Workshop to run during normal office hours, all work on the book took place in evenings and at weekends. It took the pair 6 months to write The Magic Quest, which by this time had a proper name. The adventure was set inside Firetop Mountain. And the final encounter was with the Warlock Zagor. Hence: The Warlock of Firetop Mountain.

The plot itself was split in two. Ian wrote the first half of the adventure, up to the river crossing. Steve wrote the second half, from the river onwards, devised the combat rules and the key system to prevent the reader cheating his way through. But when they finally handed in the manuscript, a very apologetic sub-editor explained that it still needed work. The writing style changed completely when you arrived at the river! The manuscript required a re-write. Word processors had yet to be invented, so that meant re-typing huge sections of text all over again.

But the second draft was fine and The Warlock of Firetop Mountain first appeared in August 1982, published by Puffin Books, Penguin's famous children's imprint.

Sales at first were nothing exceptional. But word began to spread around schools, colleges and also - thanks to the Games Workshop connection - around the games community. This was something new; part-book, part-game and part-puzzle. Within the first 3 months Warlock had been reprinted 3 times. Within the first year it was reprinted twenty times!

Penguin desperately needed a sequel. So work started immediately on The Citadel of Chaos (Steve) and The Forest of Doom (Ian) û any difference in writing styles would no longer be an issue if the two authors were writing on their own. In March 1983, the 3 titles were topping The Sunday Times bestseller charts. The Fighting Fantasy phenomenon had arrived!

The success of FF inevitably brought its critics. An outspoken member of the Evangelical Alliance called them the work of Satan and demanded they be banned. Frequently asked by the media whether stories of swords, sorcery and demons were suitable for a childrenÆs publisher like Puffin, Editorial Director Liz Attenborough did a valiant job of defending the honour of FF. But for every critic there was also a FF supporter. Teachers, for example, reported how FF had been extremely successful in getting teenage boys to read û particularly those classified as æreluctant readersÆ.

FF 59: Curse of the Mummy was the last title ever published in the main FF series. Why stop on such an odd number? Truth is, the series was due to stop at FF 50: Return to Firetop Mountain. But when this sold well and rekindled sales of the FF back catalogue, Puffin decided to keep the new titles coming. Eventually it ended with number 59. The much-awaited Bloodbones, scheduled to be FF 60, was never released. However this didnÆt prevent Amazon.com from offering the book for sale as a æcoming soonÆ item for months after Fighting Fantasy was actually out of print.

The Puffin series had become a worldwide publishing phenomenon. It was licenced to 17 countries including the USA, Germany, France, Japan and Spain û even Iceland and Estonia! Total sales to date have exceeded 15 million copies. When Puffin eventually stopped publishing in 1999, there were 59 titles in the main series, 4 Sorcery titles, Out of the Pit Monster Compendium, Titan, Fighting Fantasy the Role-Playing Games and several adventures, FF novels and a colourful æFirst AdventuresÆ series for youngsters. In total FF comprised over 70 different titles. Many of these are long gone. But more recently Fighting Fantasy has emerged as a collectorsÆ item on Internet auction sites. Curiously it is not the early books or first editions which attract the highest auction prices, but the titles published towards the end of the seriesÆ life with Puffin. Presumably these are grown-up fans completing the sets they never managed to collect in their youth.

And, in June 2002, Fighting Fantasy returns, with a new publisher - Wizard Books - and a fantastic new look. Get involved - now!