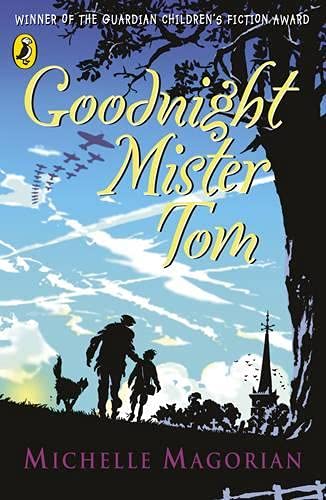 Mum said war was a punishment from God for people's sins, so he'd better watch out. She didn't tell him what to watch out for, though.

When the Second World War breaks out, young Willie Beech is evacuated to the countryside. A sad, deprived child, he slowly begins to flourish under the care of kind old Tom Oakley. But then his cruel mother summons him back to war-torn London . . .

Will he ever see Mister Tom again?

'Everyone's idea of a smash-hit first novel: full-blown characters to love and hate, moments of grief and joy, and a marvellous story that knows just how to grab the emotions' Guardian

Michelle Magorian was born in Portsmouth and on leaving school studied at the Rose Bruford College of speech and Drama and Marcel Marceau's International School of Mime in Paris. Over the years she became interested in children's books and decided to write one herself. The result was Goodnight Mister Tom, which won the Guardian Children's Fiction Award, an International Reading Association Award and was also made into a much-loved film, starring the late John Thaw.

The gruff and surly Mr Thomas Oakley is less than pleased when he is landed with a scrawny little city boy as a guest, but because it is compulsory that each villager takes in an evacuee he reluctantly agrees. It soon becomes obvious to Mister Tom that young Willie Beech is hiding something, and as the pair begin to form an unlikely bond and Willie grows in stature and in confidence he begins to forget the past. But when he has to return to war-torn London to face his mother again he retreats into his shy and awkward ways once more.

Goodnight Mister Tom is one of the most touching and powerful stories ever written. As the relationship between Willie and Tom begins to transform them both, Magorian's powerful yet gentle writing tugs at the heart, taking the reader on an incredibly emotional journey that never once stoops to unnecessary sentimentality. --Susan Harrison

"An engrossing and poignant story, with much sunlight tobalance the darkness." -- "The New Yorker""Powerful."-- "The Read-Aloud Handbook"by Jim Trelease