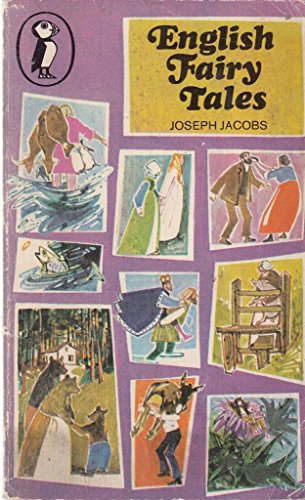 A classic collection of English Fairy Tales, illustrated in colour by Arthur Rackham.

Born in Australia in 1854, Joseph Jacobs spent most of his adult life in England where he became, with Andrew Lang, a prominent member of the English Folk Lore Society founded in 1878. He spent ten years collecting from storytellers or printed sources the fairy tales that were first published in two volumes in 1890 and 1894 and now appear here in one Everyman’s Library volume. Jacobs was a cheerful man, with a down-to-earth attitude towards fairy tales, which he regarded as “essentially colloquial” rather than romantic. Though his approach to collecting and recording material was scholarly, his telling of the tales was deliberately directed at young listeners, and he tried them out on his own three children. He died in 1916.

Book Description Puffin Books, Middlesex, England, 1977. Paperback. Condition: Very Good. Margery Gill; (illustrator). Fifth Printing. 159 pp. Light edge and corner wear with a flat uncreased spine; four ink marks on the title page; no other interior markings. Illustrated with line drawings by Margery Gill. This story collection contains: Tom Tit Tot; The Old Woman and Her Pig; How Jack Went to Seek His Fortune; Nix Nought Nothing; Cap o' Rushes; Jack and the Beanstalk; The Story of the Three Little Pigs; The Story of the Three Bears; Jack the Giant Killer; Henny Penny; Childe Rowland; Molly Whuppie; The History of Tom Thumb; Lazy Jack; Mr Miacca; Dick Whittington and His Cat; The Laidly Worm of Spindleston Heugh; The Fish and the Ring; The Magpie's Nest; Kate Crackernuts; Fairy Oinment; The Well of the World's End; Master of All Masters; The Pied Piper; The Golden Ball; My Own Self; Tattercoats; The Old Witch; The Three Wishes; The Buried Moon; and Rushen Coatie. Seller Inventory # 216783

Book Description Paperback. Condition: Good. A good copy but with more than minor wear. For non-UK items of 1.5 kg or more may require an additional shipping charge. Seller Inventory # HBS-00294475-B

Book Description Puffin Books 1970-12-10, 1970. Paperback. Condition: Good. Item is in good condition. Some moderate creases and wear. This item may not come with CDs or additional parts including access codes for textbooks. Might be an ex-library copy and contain writing/highlighting. The dust jacket might be missing. Seller Inventory # DS-0140304665-3

Book Description Puffin, 1972. Condition: Good. Shows some signs of wear, and may have some markings on the inside. Seller Inventory # GRP96181010