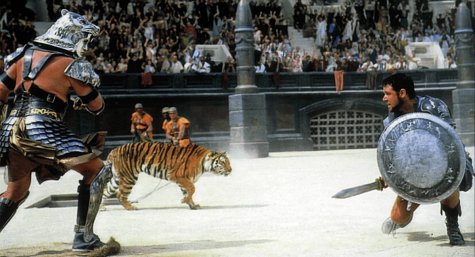 A great Roman General, Maximus (Russell Crowe) is forced into exile and slavery by Commodus (Joaquin Phoenix) the jealous heir to the throne. Trained as a gladiator in the fiercely brutal arenas, Maximus is intent on avenging the murder of his family by killing his now mortal enemy - the Emperor of the Roman Empire.

1st paperback, fine In stock shipped from our UK warehouse

Ridley Scott brings the splendour of Ancient Rome to the big screen, with Russell Crowe as the Roman general who wreaks vengeance on the man who rules the Roman empire. The film is released on 19th May 2000.