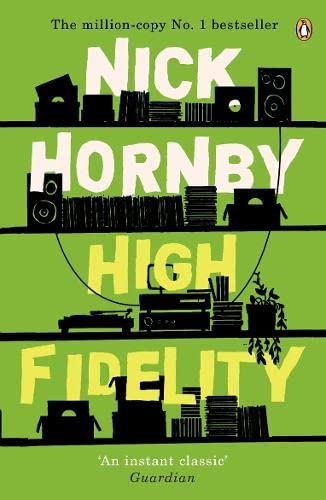 Nick Hornby's first novel, an international bestseller and instantly recognized by critics and readers alike as a classic, helps to explain men to women, and men to men. Rob is good on music: he owns a small record shop and has strong views on what's decent and what isn't. But he's much less good on relationships. In fact, he's not at all sure that he wants to commit himself to anyone. So it's hardly surprising that his girlfriend decides that enough is enough.

It has been said often enough that baby boomers are a television generation, but High Fidelity reminds that in a way they are the record-album generation as well. This hilarious novel is obsessed with music; Hornby's narrator is an early thirtysomething bloke who runs a London record store. He sells albums recorded the old-fashioned way--on vinyl--and is having a tough time making other transitions as well, specifically to adulthood. The book is in one sense a love story, both sweet and interesting; most entertaining, though, are the hilarious arguments over arcane matters of pop music. --Christine Buttery

If this book was a record, we would be calling it an instant classic. Because that is what it is (Guardian )

It will give enormous pleasure at the same time as expanding, in a small but worthwhile way, the range of English literature (Independent on Sunday )

Book Description Condition: New. Reading High Fidelity is like listening to a great single. You know it's wonderful from the minute it goes on, and soon as it's over you want to hear it again because it makes you feel young, and grown-up, and puts a stupid grin on your face all at the same time. If this book was a record, we would be calling it an instant classic. Because that's what it is' Suzanne Moore, Guardian & lt;br/ & gt;'Leaves you believing not only in the redemptive power of music but above all the redemptive power of love. Funny and wise, sweet and true' Mick Brown, Independent. Seller Inventory # 9780140293463