Items related to The Penguin Book of Modern Speeches

The Penguin Book of Modern Speeches 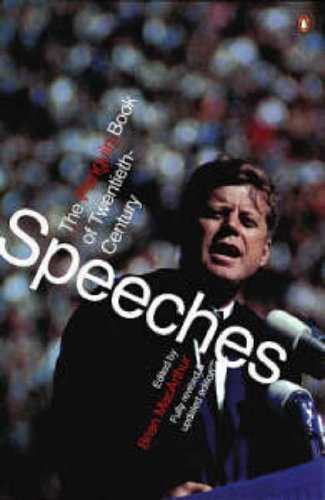 For better, for worse, the great public speakers have always had the power to change the world. Brian MacArthur's anthology includes the most famous and notorious speeches delivered in English since 1899 as well as speeches in translation by Lenin, Stalin, Mussolini and Castro among others. From Vaclav Havel to Martin Luther King, and from Hitler winning over the industrialists to Churchill rousing the English, this anthology contains many of the masterpieces that helped shape the 20th Century. This edition has been full revised and new speeches added.

Brian MacArthur was founder editor of Today and The Times Higher Education Supplement, and editor of the Western Morning News. He was deputy editor of the Sunday Times and executive editor of The Times. He has written Surviving the Sword: Prisoners of the Japanese 1942-1945. He has been interested in the power of oratory since first hearing Aneurin Bevan on the hustings in 1956 and has edited The Penguin Book of Modern Speeches and The Penguin Book of Twentieth-Century Protest. Brian MacArthur lives in Norfolk and London and has two daughters.

1. The Penguin Book of Twentieth-Century Speeches

2. The Penguin Book of Twentieth-Century Speeches