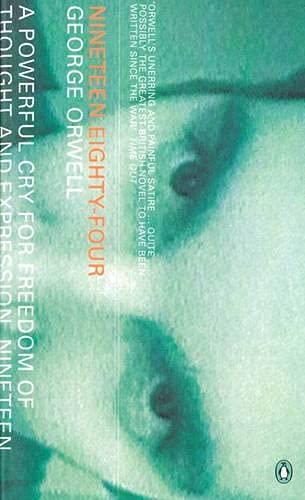 Newspeak, Doublethink, Big Brother, the Thought Police - the language of 1984 has passed into the English Language as a symbol of the horrors of totalitarianism. George Orwell's story of Winston Smith's fight against the all-pervading party has become a classic, not the least because of its intellectual coherence.

This book makes you think This book talks about a future, not the sci-fi kind but the society at large in the year which is approximately around 1984, of which even the Winston(protagonist) isn't sure. The cruel party taking control over the human instinct through fear and hatred, manipulating the minds of its citizens through a process which enables the rulers to make wrong into right and vice-versa. The citizens of Oceania lives in the state of "doublethink" , a mental state which changes the very nature of objective reality. e.g if the party says that it's night during a sunny day, the doublethink makes you believe... --Abhiraj Jan 6, 2012

Classic read This is a must read for any student of politics. At this price, the book was a steal(the quality of the pages were quite good). Flipkart's delivery was in time (bought it using cash-on-delivery). --Ashwin Sudhakar Jan 4, 2012

I read this book partly due to the hype surrounding it on online forums/news aggregators (it's number two on Reddit's favorite books). But I should say that I am quite disappointed. The book has a single core idea which could be explained in a few words. Instead of doing this, Orwell wrote a whole novel in which he revisits the idea then and there. I found this incredibly boring - 2/5. Now as for the book itself, the binding is decent and would easily survive a few reads. The printing is clear and legible for the price. --Mr.Kumar Dec 17, 2011

Volume 9 from The Complete Works of George Orwell, available separately for this first time.