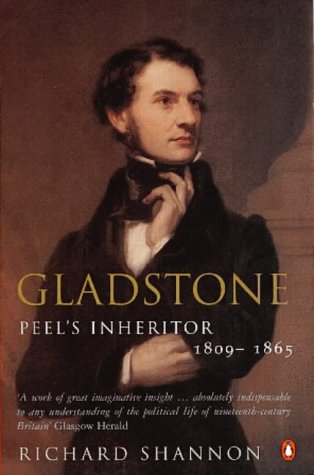 Born in 1809 and dying in 1898, Gladstone lasted almost exactly as long as the century he dominated. As leading light of the Liberal Party and four times Prime Minister, Gladstone's life touches on almost every aspect of the Victorian age. Shannon's magisterial biography, of which this is Volume One (Volume Two is Gladstone: Heroic Minister--1865- 1898) provides a detailed and extremely insightful portrait of the man. Shannon is able to do this, largely, because of Gladstone's lifelong habit of confiding his most intimate thoughts to a detailed personal journal, and this book accordingly shadows the glorious public trajectory of Gladstone's life with his private self-lacerating agonising about, mostly, sex. A devout and married man, Gladstone was drawn to prostitutes (with whom he sublimated his sexual desire into earnest lectures on the evils of their sin) and many women friends (of one of them, the beautiful Maria Summerhayes, he confided to his journal "my thoughts of S. require to be limited and purged"). This guilty fascination is manifest from the earliest days: as a student at Oxford, for instance, he berates himself for giving in to masturbatory temptation: "beast, fool, blackguard, puppy, reptile!". Shannon expertly captures the way these urges were transformed into the "extraordinary intensity" and energy of his political life--a sort of Bill Clinton with the willpower to say "no". -- Adam Roberts

From his time as Chancellor of the Exchequer in the 1850s to his retirement in 1894, William Gladstone held sway to an unequalled degree - both over his party and over great sections of the country - for an unparalled time. This is the first volume of Richard Shannon's biography of Gladstone.

Book Description Paperback. Condition: Very Good. The book has been read, but is in excellent condition. Pages are intact and not marred by notes or highlighting. The spine remains undamaged. Seller Inventory # GOR001791486

Book Description Paperback. Condition: Fair. A readable copy of the book which may include some defects such as highlighting and notes. Cover and pages may be creased and show discolouration. Seller Inventory # GOR003615382

Book Description Penguin, 1999. Paperback. Condition: Good. A slight tan to the page edges. Previous owners name inside front page. Good condition is defined as: a copy that has been read but remains in clean condition. All of the pages are intact and the cover is intact and the spine may show signs of wear. The book may have minor markings which are not specifically mentioned. Most items will be dispatched the same or the next working day. Seller Inventory # mon0013843813

Book Description Penguin 29/04/1999, 1999. Condition: Very Good. This book is in very good condition and will be shipped within 24 hours of ordering. The cover may have some limited signs of wear but the pages are clean, intact and the spine remains undamaged. This book has clearly been well maintained and looked after thus far. Money back guarantee if you are not satisfied. See all our books here, order more than 1 book and get discounted shipping. . Seller Inventory # 7719-9780140275940

Book Description Penguin Books Ltd, 1999. Paperback. Condition: Used; Good. **Simply Brit** Shipped with Premium postal service within 24 hours from the UK with impressive delivery time. We have dispatched from our book depository; items of good condition to over ten million satisfied customers worldwide. We are committed to providing you with reliable and efficient service at all times. Seller Inventory # 2891851

Book Description Penguin 29/04/1999, 1999. Condition: Very Good. Shipped within 24 hours from our UK warehouse. Clean, undamaged book with no damage to pages and minimal wear to the cover. Spine still tight, in very good condition. Remember if you are not happy, you are covered by our 100% money back guarantee. Seller Inventory # 6545-9780140275940

Book Description Penguin Books Ltd, 1999. Condition: Fair. This is an ex-library book and may have the usual library/used-book markings inside.This book has soft covers. In fair condition, suitable as a study copy. Please note the Image in this listing is a stock photo and may not match the covers of the actual item,450grams, ISBN:9780140275940. Seller Inventory # 4505514

Book Description Penguin Books Ltd, 1999. Paperback. Condition: Good. Good condition, slight tanning to page margins. This book is in stock now, in our UK premises. Photos of most of our books are available - please ask, as dustjacket and cover illustrations vary, and unless the accompanying image is marked 'Bookseller Image', it is an Abebooks Stock Image, NOT our own. Overseas buyers also note that shipping rates apply to packets of 750g and under, and should the packed weight of an item exceed this we reserve the right to ship via 'Economy', or request extra postage prior to fulfilling the order, or cancel. Seller Inventory # mon0000084471