Items related to A Passage to India

A Passage to India 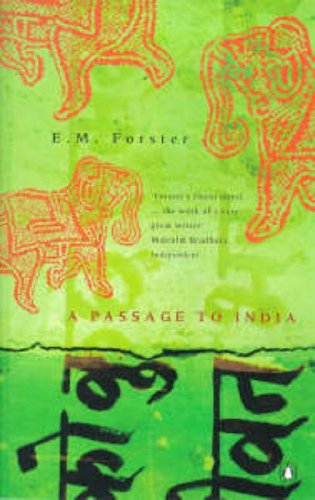 What did happen to Miss Quested in the Marabar Caves? This tantalizing question provides the intense drama of racial tension at the centre of Forster's last and greatest novel.

After a mysterious incident during their visit to the caves, the charming Dr Aziz is accused of assaulting Adela Quested, a naive young Englishwoman new to India. As he is brought to trial, the fragile structure of Anglo-Indian relations collapses and the racism inherent in colonialism is exposed in all its ugliness -a theme which still has powerful, dangerous realities today.

What really happened in the Marabar caves? This is the mystery at the heart of E.M. Forster's 1924 novel, A Passage to India, the puzzle that sets in motion events highlighting an even larger question: can an Englishman and an Indian be friends?

Written while England was still firmly in control of India, Forster's novel follows the fortunes of three English newcomers to India--Miss Adela Quested, Mrs Moore and Cyril Fielding--and the Indian, Dr Aziz, with whom they cross destinies. The idea of true friendship between the races was a radical one in Forster's time, and he makes it abundantly clear that it was not one that either side welcomed.

Despite their countrymen's disapproval, Miss Quested, Mrs Moore and Mr Fielding are all eager to meet Indians, and in Dr Aziz they find a perfect companion: educated, westernized, and open- minded. Slowly, the friendships ripen, especially between Aziz and Fielding. Having created the possibility of esteem based on trust and mutual affection, Forster then subjects it to the crucible of racial hatred: during a visit to the famed Marabar caves, Miss Quested accuses Dr Aziz of sexually assaulting her, but then later recants during the frenzied trial that follows. Under such circumstances, affection proves to be a very fragile commodity indeed.

Arguably Forster's greatest novel, A Passage to India paints a troubling portrait of colonialism at its worst, and is remarkable for the complexity of its characters. Here the personal becomes the political, and in the breach between Aziz and his English "friends", Forster foreshadows the eventual end of the Raj. --Alix Wilber

In a world far removed from the one in which Forster was writing, is there any place for a novel like A Passage to India other than as an idle curiosity of a bygone era? Written based on first hand experience of the British Raj, this open critique of colonialism caricatures the Anglo-Indian in his element, questioning the morality and justification of the British presence in the subcontinent. A Passage to India is built upon its characters, who are the led through a fairly mundane plot, a jejune stage for the actors to perform upon. Yet through their actions, we discover this world of Empire, where Anglo-Indians hold themselves aloof from the population, where relationships are grounded on the basis of ruler and ruled. Forster challenges the British Raj as it was then. But he also poses questions relevant to our everyday lives: can the cultures of East and West ever truly understand one another? is it possible even for two individuals to truly understand one another? can anything good ever come from a relationship in which one party dominates the other? and what can we really understand about 'identity' through the prism of nationhood? There is no doubt much in this book which can be analysed and overanalysed to the nauseating degree that only a literature class can provoke, and I can imagine that many who studied this novel in a classroom environment learned only to hate it. Where the simplicity of the plot provides only a thread for the characters to follow, the imagery of India's weather and terrain, her townships and cultural diversity, combine to provide symbolic tapestry lending itself to interpretation --By Felix Valencia on 3 Nov. 2012

A Passage to India is set in the rural landscape during a time of British occupation. This is a (not necessarily damning) examination and critique of colonialism and offers a very wide view of the issues it raises. There are no heroics here. Aziz is the downtrodden 'native' character, apallingly abused, to whom my sympathies attached, and yet the hatred that surrounds him turns him to hatred and propels down a vengeful path towards a kind of destruction. Only his long-standing friendship with Mr. Fielding can save him, but Mr. Fielding is English, and Aziz must reconcile himself with this and conquer his own hatred. --By Dan Crawford on 2 Aug. 2012

The language of this work is by far the best I've come across. Amazing! E M Forster is undoubtedly one of the most eloquent writers. The character build-up is slow, steady and realistic. Gives a very close picture of the Indian society that existed during the British Raj and remnants of which can still be found in us Indians - not only our buildings, out attitude, our tastes and our demeanor in general --Saad Hashmi Dec 30, 2014

A Passage to India