Items related to A Spell of Winter

Dunmore, Helen A Spell of Winter

A Spell of Winter 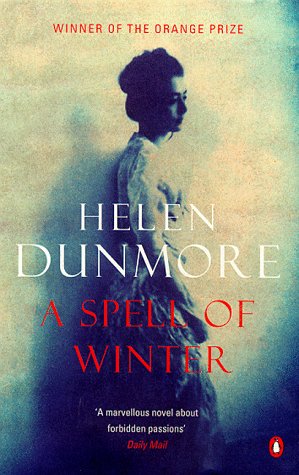 This is a novel set just before, during and after World War I. It is the story of a brother and sister whose mother deserts them and whose father goes mad. Incarcerated in an enormous house in the country, their intense emotional relationship becomes a sexual one.

An intensely gripping book...written so seductively that some passages sing out from the page, like music for the eyes (Sunday Times)

An electrifying and original talent, a writer whose style is characterized by a lyrical, dreamy intensity (Guardian)

Helen Dunmore has published nine novels with Penguin: Zennor in Darkness, which won the McKitterick Prize; Burning Bright; A Spell of Winter, which won the Orange Prize; Talking to the Dead; Your Blue-Eyed Boy; With Your Crooked Heart; The Siege, which was shortlisted for the 2001 Whitbread Novel of the Year Award and for the Orange Prize for Fiction 2002; Mourning Ruby and House of Orphans. She is also a poet, children’s novelist and short-story writer.