Items related to Death, Dissection and the Destitute

Death, Dissection and the Destitute 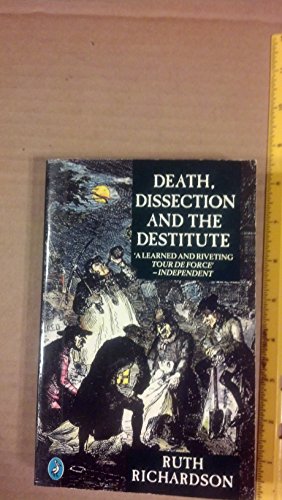 In the early nineteenth century, body snatching was rife because the only corpses available for medical study were those of hanged murderers. With the Anatomy Act of 1832, however, the bodies of those who died destitute in workhouses were appropriated for dissection. At a time when such a procedure was regarded with fear and revulsion, the Anatomy Act effectively rendered dissection a punishment for poverty. Providing both historical and contemporary insights, "Death, Dissection, and the Destitute" opens rich new prospects in history and history of science. The new afterword draws important parallels between social and medical history and contemporary concerns regarding organs for transplant and human tissue for research.

Ruth Richardson is a historian living in London.

Until 1832 dissection-much hated and much feared-was restricted to the corpses of hanged murderers. Bodysnatching was rife. The 1832 Anatomy Act, however, appropriated instead the corpses of the poor, effectively rendering dissection a punishment for poverty. "Death, Dissection and the Destitute" reveals why fear of the pauper funeral so afflicted the nineteenth-century poor. Ruth Richardson's book opens rich prospects in history and the history of science. Her new afterword draws important parallels between historical and current concerns about the body, organs for transplant, and human tissue for research.