Items related to The Levant Trilogy: The Danger Tree; the Battle Lost... 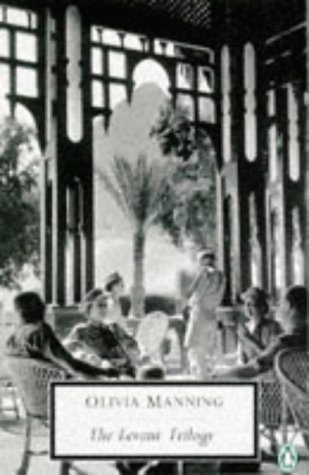 Having fled a Europe overrun by Hitler, Guy and Harriet Pringle live a precarious existence in Cairo. Also newly arrived is Simon Boulderstone, a young officer. For each of them there is disillusionment and isolation as they battle with their problems heightened by the uncertainties of war.

One of the "Five Best of World War II Fiction" -- Antony Beevor, "The Wall Street Journal" "Books not nearly as good are touted as definitive portraits of the war; very little on a best-seller list is more readable. Manning's giant six-volume effort is one of those combinations of soap opera and literature that are so rare you'd think it would meet the conditions of two kinds of audiences: those after what the trade calls 'a good read, ' and those who want something more." --Howard Moss, "The New York Review of Books" ""The Balkan Trilogy" A fantastically tart and readable account of life in eastern Europe at the start of the war. The follow-up "Levant Trilogy" is just as good, too." --Sarah Waters "Dramatic, comic and entirely absorbing." --Carmen Callil "I shall be surprised, and, I must admit, dismayed if the whole work is not recognized as a major achievement in the English novel since the war. Certainly it is an astonishing recreation." --Walter Allen, T"he New York Times" ""The Great Fortune, The Spoilt City," and" Friends and Heroes "comprise a remarkable impression of traumatic world events as they impinged on the daily lives of (mostly) British permanent or temporary expatriates, encountered...[Manning] writes with blessed economy, evoking the sights and smells of the Middle East, the spring-green deserts and a mosque at dawn, with beautiful precision rather than purple passages...She has been compared with Graham Greene and Anthony Powell. Anthony Burgess, who thinks the two trilogies may prove to be the 'finest fictional record of the war produced by a British writer, ' finds in her a kinship with Tolstoy." --Charles Champlin, "Los Angeles Times" "Her gallery of personages is huge, her scene painting superb, her pathos controlled, her humour quiet and civilized." --Anthony Burgess "Miss Manning is one of the very best of our novelists. She has a voice of her own." --Pamela Hansford Johnson, "The New York Times" "So glittering is the overall parade...and so entertaining the surface that the trilogy remains excitingly vivid: it amuses, it diverts and it informs'." --Frederick Raphael "Neither eye nor ear nor memory has failed the author. She has reproduced, in the atmosphere of wartime Rumania, exactly that miasma compounded of bravado and fear, extravagance and hunger, pretense and anguish, chicanery and stoicism, which hung over all the little, rumor-ridden capitals before their doom."--V. Peterson, "The New York Times"

The classic World War II trilogy: 'The finest fictional record of the war produced by a British writer' Anthony Burgess

The Levant Trilogy: The Danger Tree; the Battle Lost And Won; the Sum of Things (Penguin Twentieth Century Classics S.)

Book Description Paperback. Condition: Very Good. The book has been read, but is in excellent condition. Pages are intact and not marred by notes or highlighting. The spine remains undamaged. Seller Inventory # GOR001238126

Book Description Paperback. Condition: Fair. A readable copy of the book which may include some defects such as highlighting and notes. Cover and pages may be creased and show discolouration. Seller Inventory # GOR001802282

Book Description Paperback. Condition: Good. The book has been read but remains in clean condition. All pages are intact and the cover is intact. Some minor wear to the spine. Seller Inventory # GOR001865858

Book Description Condition: Good. Ships from the UK. Former library book; may include library markings. Used book that is in clean, average condition without any missing pages. Seller Inventory # GRP37207627

The Levant Trilogy: The Danger Tree; the Battle Lost And Won; the Sum of Things (Penguin Twentieth Century Classics S.)

Book Description Paperback. Condition: Very Good. The book has been read, but is in excellent condition. Pages are intact and not marred by notes or highlighting. The spine remains undamaged. Seller Inventory # CIN000934224

Book Description Paperback. Condition: Very Good. Item is in very good condition. If supplemental codes/CDs for textbooks are required please contact us prior to purchasing as they may be missing. Photos are stock pictures and not of the actual item. Seller Inventory # DS-0140189122-2

The Levant Trilogy: The Danger Tree; The Battle Lost and Won; The Sum of Things