Items related to Goodbye to All That (Twentieth Century Classics S.)

Graves, Robert Goodbye to All That (Twentieth Century Classics S.)

Goodbye to All That (Twentieth Century Classics S.) 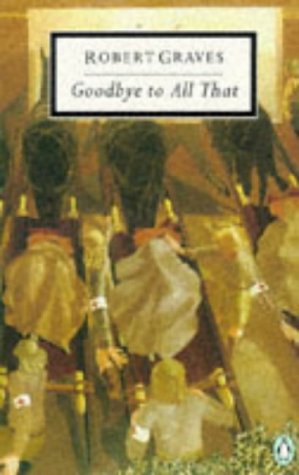 English novelist, poet, and essayist Graves, author of "I, Claudius" describes the break he made with his past in 1929. In chronicling his youth, World War I experiences, and years at Oxford, Graves gives parallel accounts of the end of his own innocence and that of the world prior to the Great War.

"The best memoir of the First World War."
--Paul Fussell

"One of the classic accounts of the Western Front."
--THE TIMES (London) "From the moment of its first appearance an established classic."
--THE OBSERVER (London) "One of the most candid self-portraits of a poet . . . ever painted."
--THE TIMES LITERARY SUPPLEMENT (London) About the Author:

Robert Graves was born in 1895 in Wimbledon. He went from school to the First World War, where he became a captain in the Royal Welch Fusiliers and was seriously wounded at the Battle of the Somme. He wrote his autobiography, Goodbye to All That, in 1929, and it was soon established as a modern classic. He died on 7 December 1985 in Majorca, his home since 1929.

Good-Bye to All That : An Autobiography

20th Century Goodbye To All That Graves, Robert