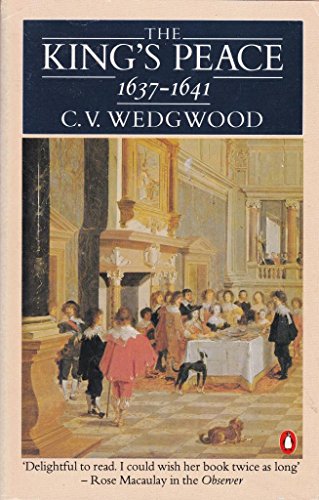 This volume tells the story of the four eventful years which immediately preceded the Civil War, years which transformed the tranquil dominions of King Charles into a land rent by mistrust and menaced by fire and sword. It tells of the rise of the covenanters in Scotland with such leaders as the gallant Montrose and the mysterious Argyll. It tells of Parliament's opposition to the King under the skilful leadership of John Pym. The tragedy of Strafford is linked with the terrible insurrection in Ireland. Miss Wedgewood has sought to convey the vivid day sequence of events as they flooded down on the men & women of the time, and to restore as far as possible the immediacy of their experience.

Dame Veronica Wedgwood was born in 1910 and educated in London, France, Germany and at Oxford University. She was awarded the Order of Merit in 1969. A prolific writer, her books include The King's War and The Trial of Charles I also published in Penguin Classic History. Professor Sir John Plumb wrote of Dame Veronica that 'Her gifts are splendid and altogether exceptional. She is a great craftswoman and a great writer.'

Book Description Penguin Books, 1983. Condition: Good. This is an ex-library book and may have the usual library/used-book markings inside.This book has soft covers. In good all round condition. Please note the Image in this listing is a stock photo and may not match the covers of the actual item,400grams, ISBN:9780140171570. Seller Inventory # 8264314

Book Description Penguin Books Ltd, 1993. Paperback. Condition: Used; Good. **Simply Brit** Shipped with Premium postal service within 24 hours from the UK with impressive delivery time. We have dispatched from our book depository; items of good condition to over ten million satisfied customers worldwide. We are committed to providing you with reliable and efficient service at all times. Seller Inventory # 1322103

Book Description Penguin Books Ltd, 1993. Paperback. Condition: Used; Good. **SHIPPED FROM UK** We believe you will be completely satisfied with our quick and reliable service. All orders are dispatched as swiftly as possible! Buy with confidence! Aloysius Ihezie. Seller Inventory # mon0001335688

Book Description Paperback. Condition: Very Good. The book has been read, but is in excellent condition. Pages are intact and not marred by notes or highlighting. The spine remains undamaged. Seller Inventory # GOR004480777

Book Description Paperback. Condition: Good. The book has been read but remains in clean condition. All pages are intact and the cover is intact. Some minor wear to the spine. Seller Inventory # GOR003913618