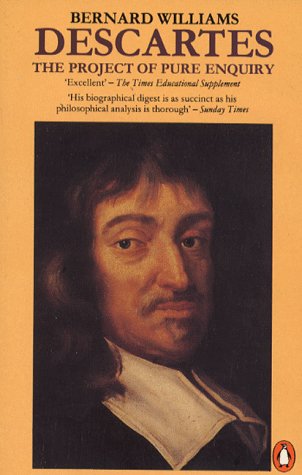 Descartes has often been called the 'father of modern philosophy'.His attempts to find foundations for knowledge, and to reconcile the existence of the soul with the emerging science of his time, are among the most influential and widely studied in the history of philosophy.

This is a classic and challenging introduction to Descartes by one of the most distinguished modern philosophers. Bernard Williams not only analyzes Descartes' project of founding knowledge on certainty, but uncovers the philosophical motives for his search. With acute insight, he demonstrates how Descartes' Meditations are not merely a description but the very enactment of philosophical thought and discovery. Williams covers all of the key areas of Descartes' thought, including God, the will, the possibility of knowledge, and the mind and its place in nature. He also makes profound contributions to the theory of knowledge, metaphysics and philosophy generally. This is essential reading for any student of philosophy.

This reissue includes a new foreword by John Cottingham.

'His biographical digest is as succinct as his philosophical analysis is thorough.' - The Sunday Times

'Bernard Williams is arguably the greatest philosopher of his era.' - The Guardian

'Descartes - The Project of Pure Enquiry, first published in 1978 and repackaged here with a foreword by the Cartesian scholar John Cottingham, is a good deal more than just a survey of one of the landmarks in the history of philosophy. It is itself a work of substantive philosophical analysis and a reminder of just what British philosophy lost when Williams died in 2003.' - New Humanist

'[Bernard Williams] brought philosophical reflection to an opulent array of subjects, with more imagination and with greater cultural and historical understanding than anyone else of his time' Thomas Nagel, London Review of Books

'Bernard Williams has a greater force of thought, deployed over a wider horizon, than anyone else I have ever listened to.' John Dunn - The Times Higher Education Supplement

Bernard Williams died in 2003. He taught at the Universities of London, Cambridge, Oxford and the University of California at Berkeley, and was one of the leading philosophers of his generation. He wrote many influential books including Problems of the Self and Ethics and the Limits of Philosophy. His last work was Truth and Truthfulness: An Essay in Genealogy (2002).