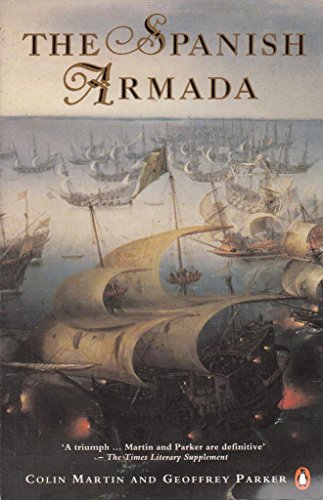 This book looks at the failure of Philip II's Spanish Armada in 1588. The authors use new evidence to answer questions which have remained a mystery for 400 years: what was the reality of the Spanish threat and why did the Armada fail? Material from archives in Spain and The Netherlands has been augmented by the discoveries of Armada wrecks have enabled the authors to put together the pieces of the puzzle, fully explaining the phenomenon of the Spanish Armada and coming up with some unexpected conclusions.

Colin Martin is Reader in Maritime Archaeology at the University of St. Andrews. Geoffrey Parker is Professor of History at Ohio State University.

Book Description Penguin Books, 1992. Condition: Good. This is an ex-library book and may have the usual library/used-book markings inside.This book has soft covers. In good all round condition. Please note the Image in this listing is a stock photo and may not match the covers of the actual item,300grams, ISBN:9780140125351. Seller Inventory # 7360513

Book Description W. W. Norton & Co, 1992. Condition: Good. A+ Customer service! Satisfaction Guaranteed! Book is in Used-Good condition. Pages and cover are clean and intact. Used items may not include supplementary materials such as CDs or access codes. May show signs of minor shelf wear and contain limited notes and highlighting. Seller Inventory # 0140125353-2-4