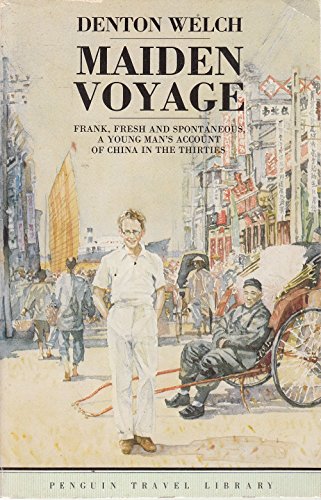 After I had run away from school, no one knew what to do with me. . .' Born in Shanghai in 1915, son of a wealthy rubber merchant, Denton Welch was dispatched to an English boarding school after his mother's death. There he suffered, and soon absconded, forcing his father to bring him back to Shanghai where further travels and adventures ensued. Maiden Voyage (1943) is Welch's semi-novelistic, beautifully observed account of these formative experiences. 'Denton Welch's subject matter had a richness and a colour that links him with very unlike writers, such as Dylan Thomas, Edith Sitwell and Christopher Fry, all of whom were standing out against the drabness of their times.' Alan Bennett 'Such a marvelous writer.' William S Burroughs

Book Description Paperback. Condition: Very Good. The book has been read, but is in excellent condition. Pages are intact and not marred by notes or highlighting. The spine remains undamaged. Seller Inventory # GOR001494882

Book Description Paperback. Condition: Fair. A readable copy of the book which may include some defects such as highlighting and notes. Cover and pages may be creased and show discolouration. Seller Inventory # GOR001504188

Book Description Paperback. Condition: GOOD. Spine creases, wear to binding and pages from reading. May contain limited notes, underlining or highlighting that does affect the text. Possible ex library copy, will have the markings and stickers associated from the library. Accessories such as CD, codes, toys, may not be included. Seller Inventory # 3293033039

Book Description Paperback. Condition: Good. Item is in good condition. Some moderate creases and wear. This item may not come with CDs or additional parts including access codes for textbooks. Might be an ex-library copy and contain writing/highlighting. Photos are stock pictures and not of the actual item. Seller Inventory # DS-0140095225-3

Book Description Trade Paperback. Condition: GOOD. (reprint). "Ex-library with expected markings and protective cover. Faint age toning of pages. From running away from school in England to "his impressions of the Temple of Heaven in Peking he reveals his unique gift for observation coupled with a brilliantly idiosyncratic appreciation." of the world around him.". Seller Inventory # 7-3T002

Book Description Condition: Good. A+ Customer service! Satisfaction Guaranteed! Book is in Used-Good condition. Pages and cover are clean and intact. Used items may not include supplementary materials such as CDs or access codes. May show signs of minor shelf wear and contain limited notes and highlighting. Seller Inventory # 0140095225-2-4