Items related to Adieux: A Farewell to Sartre

Adieux: A Farewell to Sartre 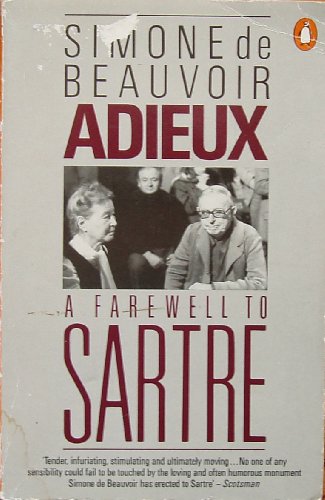 Adieux Simone de Beauvoir's account of the last ten years of Jean-Paul Sartre's life provides a focus for understanding one of the greatest thinkers of the twentieth century. But the book, consisting of both a year-by-year account of Sartre's last decade and a conversation between him and de Beauvoir about his life and work, is more than just a philosophical examination. It is also a personal dialogue of... Full description

SIMONE DE BEAUVOIR was born in Paris in 1908. In 1929 she became the youngest person ever to obtain the agrégation in philosophy at the Sorbonne, placing second on the exam to Jean-Paul Sartre. She taught at lycées in Marseille and Rousen from 1931 to 1937, and in Paris from 1938 to 1943. After World War II, she emerged as one of the leaders of the existentialist movement, working with Sartre on Les Temps Modernes. The author of many acclaimed works, de Beauvoir was one of the most influential thinkers of her generation. She died in 1986.

1. Adieux: A Farewell to Sartre

Book Description Paperback. Condition: Very Good. The book has been read, but is in excellent condition. Pages are intact and not marred by notes or highlighting. The spine remains undamaged. Seller Inventory # GOR001290416

2. Adieux: A Farewell to Sartre

Book Description Penguin UK, 1985. Condition: Good. A+ Customer service! Satisfaction Guaranteed! Book is in Used-Good condition. Pages and cover are clean and intact. Used items may not include supplementary materials such as CDs or access codes. May show signs of minor shelf wear and contain limited notes and highlighting. Seller Inventory # 0140077626-2-4

3. Adieux: A Farewell to Sartre

Book Description Penguin Books Ltd, 1985. Paperback. Condition: Used; Good. **Simply Brit** Shipped with Premium postal service within 24 hours from the UK with impressive delivery time. We have dispatched from our book depository; items of good condition to over ten million satisfied customers worldwide. We are committed to providing you with reliable and efficient service at all times. Seller Inventory # mon0001537708

Book Description Penguin Books Ltd, 1985. Paperback. Condition: Used; Good. stains on the side. stains on some pages **SHIPPED FROM UK** We believe you will be completely satisfied with our quick and reliable service. All orders are dispatched as swiftly as possible! Buy with confidence! Aloysius Ihezie. Seller Inventory # 3816151

5. Adieux: A Farewell To Sartre

Book Description Penguin UK 1985-10-01, 1985. Paperback. Condition: Good. Item is in good condition. Some moderate creases and wear. This item may not come with CDs or additional parts including access codes for textbooks. Might be an ex-library copy and contain writing/highlighting. Seller Inventory # DS-0140077626-3

6. Adieux: A Farewell to Sartre