Items related to On the Yankee Station

William Boyd On the Yankee Station

On the Yankee Station 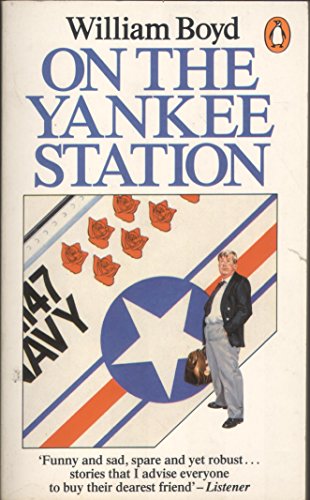 Wiliam Boyd, winner of the Whitbread and Somerset Maugham Awards, introduces unlikely heroes desperate to redeem their unsatisfying lives. From California poolsides to the battlegrounds of Vietnam, here is a world populated by weary souls who turn to fantasy as their sole escape from life's inequities. Stranded in an African hotel during a coup, an oafish Englishman impresses a young stewardess with stories of an enchanted life completely at odds with his sordid existence in "The Coup." In the title story, an arrogant, sadistic American pilot in Vietnam underestimaets the power of revenge when he relentlessly persecutes a member of his maintenance crew. With droll humor and rare compassion, Boyd's enthralling stories remind us of his stature as one of contemporary fiction's finest storytellers.

"Mr. Boyd seems singularly blessed with both an innate love of storytelling and the talent to render those stories in swift, confident prose."?Michiko Kakutani, The New York Times

William Boyd s first novel, A Good Man in Africa, won a Whitbread Prize and a Somerset Maugham Award; his second, An Ice-Cream War, was awarded the John Llewellyn Rhys Prize and was shortlisted for the Booker Prize; Brazzaville Beach won the James Tait Black Memorial Prize; and The Blue Afternoon won the Los Angeles Times Prize for Fiction. Boyd lives in London."

1. On the Yankee Station Boyd, William