Items related to World of Wonders 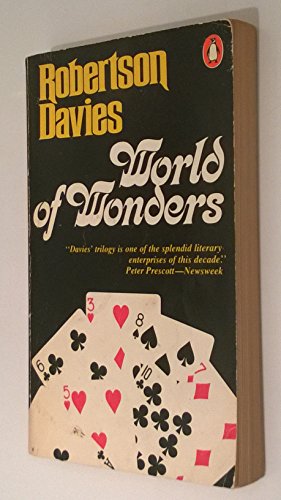 Hailed by the Washington Post Book World as "a modern classic," Robertson Davies's acclaimed Deptford Trilogy is a glittering, fantastical, cunningly contrived series of novels, around which a mysterious death is woven. World of Wonders-the third book in the series after The Manticore-follows the story of Magnus Eisengrim-the most illustrious magician of his age-who is spirited away from his home by a member of a traveling sideshow, the Wanless World of Wonders. After honing his skills and becoming better known, Magnus unfurls his life's courageous and adventurous tale in this third and final volume of a spectacular, soaring work.

"Robertson Davies is one of the great modern novelists." --Malcolm Bradbury, The Sunday Times (London

"Robertson Davies is a novelist whose books are thick and rich with humor, character and incident. They are plotted with skill and much flamboyance." --The Observer (London)

Robertson Davies (1913-1995) was an actor, a University Professor and a writer. He is the author of The Salterton Trilogy, The Deptford Trilogy and The Cornish Trilogy.

M.G. Vassanji was born in Kenia and raised in Tanzania. His first novel, The Gunny Sack, won the Commonwealth Writers' Prize in 1990. His other books include Uhuru Street, No New Land, Amriika, and The In-Between World of Vikram Lall. He lives in Toronto.