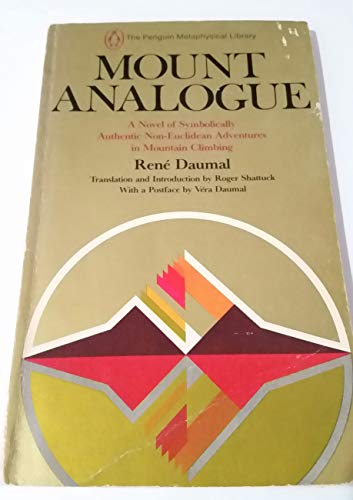 In this novel/allegory the narrator/author sets sail in the yacht Impossible to search for Mount Analogue, the geographically located, albeit hidden, peak that reaches inexorably toward heaven. Daumal's symbolic mountain represents a way to truth that "cannot not exist," and his classic allegory of man's search for himself embraces the certainty that one can know and conquer one's own reality.

Rene Daumal (1908-44) was one of the most original thinkers of the twentieth century. A follower of the teachings of G.I. Gurdjieff, he was also a poet, philosopher, and scholar of religion and Sanksrit. In his late-teens his avant-garde poetry was published in leading journals, and barely in his twenties, as a counter to Surrealism and Dadaism, he founded a literary journal Le Grand Jeu. He wrote many essays on religion and philosophy, trained himself in Oriental languages, and engaged in drug experiments to test the limits of the consciousness of the mind, which probably precipitated his death from tuberculosis at age 35. and received the Jacques Doucet prize for his first volume of poetry Le Contre-Ciel. Mount Analogue was first published posthumously, in 1952.