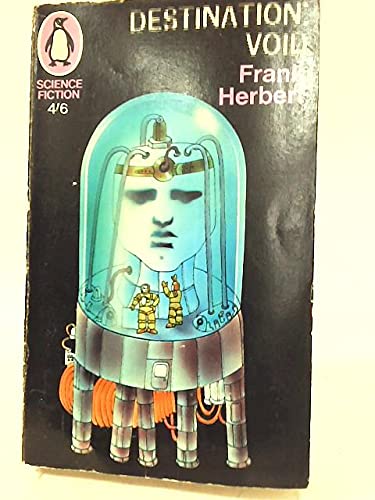 SCIENCE FICTION-PROBLEM-TO BUILD A COMPLETE HUMAN CONSCIOUSNESS OUT OF COMPUTER HARDWARE AND DESPERATION!SOON AFTER THE START THEY WENT MAD,THE THREE POWERFUL,DISEMBODIED HUMAN BRAINS THAT SHOULD HAVE GUIDED THEM FOR THE 200 YEAR JOURNEY TO TAU CETI.COULD THEY MANUFACTURE A REPLACEMENT BEFORE EMERGING FROM THE SOLAR SYSTEM INTO NOTHINGNESS?WOULD THE CIRCUITS REPRODUCE THE CHARACTERISTICS THEY NEEDED,CHARACTERISTICS LIKE CONSCIENCE,LOVE AND GUILT?OR WOULD THEY END UP WITH A ZOMBIE?A MONSTER?A POWER CRAZY FANATIC?-OR A GENIUS?WHAT THEY DID BUILD WAS FANTASTIC,UNGUESSABLE.YET,LOOKING BACK,IT WAS ALWAYS ON THE CARDS.

Frank Herbert (1920-1986) created the most beloved novel in the annals of science fiction, Dune. He was a man of many facets, of countless passageways that ran through an intricate mind. His magnum opus is a reflection of this-a classic work that stands as one of the most complex, multilayered novels ever written in any genre. Today the novel is more popular than ever, with new readers continually discovering it and telling their friends to pick up a copy. It has been translated into dozens of languages and has sold almost twenty million copies. His major novels included The Dragon in the Sea, Soul Catcher (his only non-science fiction novel), Destination: Void, The Santaroga Barrier, The Green Brain, Hellstrom's Hive, Whipping Star, The Eyes of Heisenberg, The Godmakers, Direct Descent, and The Heaven Makers. He also collaborated with Bill Ransom to write The Jesus Incident, The Lazarus Effect, and The Ascension Factor. Frank Herbert's last published novel, Man of Two Worlds, was a collaboration with his son, Brian.

Book Description Paperback. Condition: Fair. A readable copy of the book which may include some defects such as highlighting and notes. Cover and pages may be creased and show discolouration. Seller Inventory # GOR001359202

Book Description Paperback. Condition: Good. The book has been read but remains in clean condition. All pages are intact and the cover is intact. Some minor wear to the spine. Seller Inventory # GOR001508970

Book Description Paperback. Condition: Very Good. The book has been read, but is in excellent condition. Pages are intact and not marred by notes or highlighting. The spine remains undamaged. Seller Inventory # GOR001266141