Items related to The Fox in the Attic

Hughes, Richard The Fox in the Attic 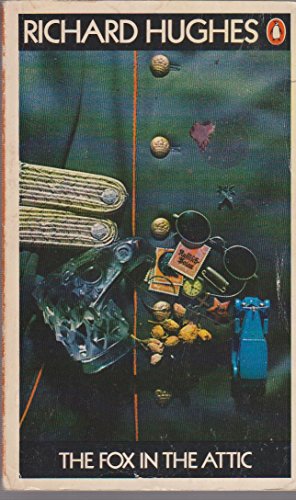 Augustine is a young man from an aristocratic family, struggling to make sense of a world devastated by the Great War. The enemy abroad may have been defeated, but when he finds himself implicated in the death of a young girl, he becomes targeted as the enemy within. Fleeing Britain, Augustine seeks refuge and solace in the remote castle of Bavarian relatives; but what he finds is a hinterland of fierce lust and terrible darkness; a paradigm of the hunger and the hatred that promises to resuscitate a ruined Germany.

The Fox in the Attic is both a haunting tale of unrequited love, and a remarkable crystallisation of a singular moment in history. Recording the moment when Germany teetered on the brink of Nazism - the pause before the thunderous fall - Hughes' prose captures both the full weight of inevitability, and the full weight of first love.

[A] magnificent, authoritative, compassionate, ironic, funny, and tragic book, in which emotional and intellectual developments in private persons are seen to be now parallel to, now conditioned by, economic and political actions.
-- The Times Literary Supplement

Hughes does not write with a researcher's smug wisdom-after-the-event but with an artist's power of recording the past as if it were the living present...The long passages on the Munich beer-hall putsch of 1923, Hitler's escape, hiding and capture are a tour de force of dreamlike action.
-- Time

[The Fox in the Attic] has many virtues, many strong and compelling moments; it continues Hughes's particular method of tracing the misapprehensions, confusions, and wrong-headedness of people who are either not able to grasp the complex currents of the world they live in, or are blinded by the obsessions of child mentality or political fanaticism or religion.
-- John Crowley, The Boston Review Book Description:

'Electrifying... Hughes has Tolstoy's vision and an imaginative reach of his own, combined with an informed, analytical intelligence; the result is historical fiction of rare integrity and distinction.' Hilary Mantel

Book Description Condition: Very Good. Shipped within 24 hours from our UK warehouse. Clean, undamaged book with no damage to pages and minimal wear to the cover. Spine still tight, in very good condition. Remember if you are not happy, you are covered by our 100% money back guarantee. Seller Inventory # 6545-9780140020694

Book Description Paperback. Condition: Very Good. The Fox in the Attic This book is in very good condition and will be shipped within 24 hours of ordering. The cover may have some limited signs of wear but the pages are clean, intact and the spine remains undamaged. This book has clearly been well maintained and looked after thus far. Money back guarantee if you are not satisfied. See all our books here, order more than 1 book and get discounted shipping. Seller Inventory # 7719-9780140020694