Items related to Our Man in Havana: An Entertainment

Greene, Graham Our Man in Havana: An Entertainment

Our Man in Havana: An Entertainment 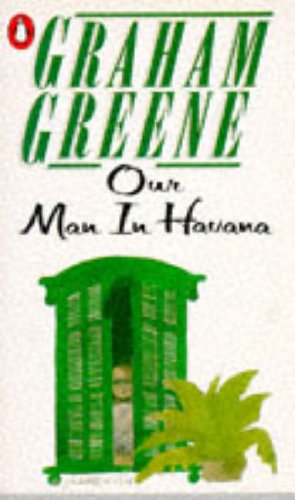 Wormold's daughter had reached an expensive age - so he accepted Hawthorne's offer of 300-plus dollars a month and became Agent 59200/5, MI6's man in Havana. To keep the job, he pretends to recruit sub-agents and sends fake stories. Then they come true.

Graham Greene's new "Entertainment" offers only a questionable diversion this time, substitutes a lightminded travesty of secret service operations (the intentions are not too clearly decipherable) for the surer suspense of the earlier books in this genre. Wormold, a vacuum cleaner representative in Havana, a middle-aged man whose daughter is his prime security interest, is tapped as secret agent number 59200 stroke five by the British Secret Service. With "no accomplice except the credulity of other men", Wormold turns in bogus reports and fabulous diagrams (vacuum cleaner parts), recruits an extensive payroll of imaginary sub-agents, and rigs an elaborate deception which backfires when one of his men materializes- only to be killed, his friend Hasselbacher is a second victim, and he is a potential third... For all the occasional overtones and undercuts, this is no more than a genial form of nonsense in which Greene is not at his best. This still may be good enough for a great many people to whom the name assumes more than is this time assured. (Kirkus Reviews)

3. OUR MAN IN HAVANA

4. Our Man in Havana

5. OUR MAN IN HAVANA