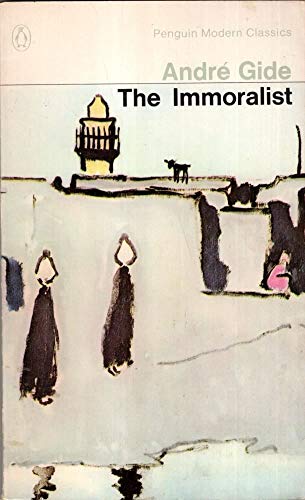 ith today's headlines and talk shows, it takes a lot to shock a reader--certainly more than was required in 1902, when Andre Gide's The Immoralist was first published. What was seen then as a story of dereliction translates today into a tale of introspection and fierce self-discovery. While traveling to Tunis with his new bride, the Parisian scholar Michel is overcome by tuberculosis. As he slowly convalesces, he revels in the physical pleasures of living and resolves to forgo his studies of the past in order to experience the present--to let "the layers of acquired knowledge peel away from the mind like a cosmetic and reveal, in patches, the naked flesh beneath, the authentic being hidden there." But this is not the Michel his colleagues knew, nor the man Marceline married, and he must hide his new values under the patina of what he now reviles. Bored by Parisian society, he moves to a family farm in Normandy. He is happy there, especially in the company of young Charles, but he must soon return to the city and academe. Michel remains restless until he gives his first lecture and runs into MĂ©nalque, who has long outraged society, and recognizes in him a reflection of his torment. Finally, Michel heads south, deeper into the desert, until, as he confides to his friends, he is lost in the sea of sand, under a clear, directionless sky. What Gide's story lacks in sensationalism is fulfilled by his descriptive prose, which evokes the exotic nature of Michel's inner and outer journey: "I did not understand the forbearance of this African earth, submerged for days at a time and now awakening from winter, drunk with water, bursting with new juices; it laughed in this springtime frenzy whose echo, whose image I perceived within myself." --Joannie Kervran Stangeland

Andre Paul Guillaume Gide was born in Paris on 22 November 1869. His father, who died when he was eleven, was Professor of Law at the Sorbonne. An only child, Gide had an irregular and lonely upbringing and was educated in a Protestant secondary school in Paris and privately. He became devoted to literature and music, and began his literary career as an essayist, and then went on to poetry, biography, fiction, drama, criticism, reminiscence, and translation. By 1917 he had emerged as a prophet to French youth and his unorthodox views were a source of endless debate and attack. In 1947 he was awarded the Nobel Prize for Literature and in 1948, as a distinguished foreigner, was given an honorary degree at Oxford. He married his cousin in 1895; he died in Paris in 1951 at the age of eighty-one.

Among Gide's best-known works in England are Strait is the Gate (La Porte etroite), the first novel he wrote, which was published in France in 1909; La Symphonie Pastorale, 1919; The Immoralist (L'Immoraliste), 1902; The Counterfeiters (Les Faux-Monnayeurs), published in 1926; and the famous Journals covering his life from 1889 to 1949 and published originally in four volumes. E. M. Forster said of him: 'The humanist has four leading characteristics - curiosity, a free mind, belief in good taste, and a belief in the human race - and all four are present in Gide ... the humanist of our age.'