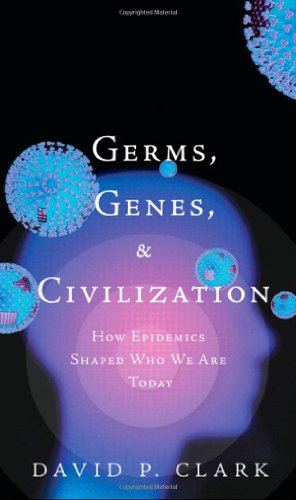 In Germs, Genes and Civilization, Dr. David Clark tells the story of the microbe-driven epidemics that have repeatedly molded our human destinies. You'll discover how your genes have been shaped through millennia spent battling against infectious diseases. You'll learn how epidemics have transformed human history, over and over again, from ancient Egypt to Mexico, the Romans to Attila the Hun. You'll learn how the Black Death epidemic ended the Middle Ages, making possible the Renaissance, western democracy, and the scientific revolution. Clark demonstrates how epidemics have repeatedly shaped not just our health and genetics, but also our history, culture, and politics. You'll even learn how they may influence religion and ethics, including the ways they may help trigger cultural cycles of puritanism and promiscuity. Perhaps most fascinating of all, Clark reveals the latest scientific and philosophical insights into the interplay between microbes, humans, and society - and previews what just might come next.

“Clear, thoughtful, and thought-provoking, Germs, Genes & Civilizationmakes the case that infectious diseases have played a major role in shaping society. Clark argues that religion, morals, and even democracy have all been influenced by the smallest and most dangerous organisms on our planet. While you may not accept every argument, you will be stimulated, entertained, and enlightened.”

“Clark presents an insightful explanation of the invisible history all around us. He conveys the essential facts in a riveting and engaging manner that everyone, including the nonscientist, will find exceptionally interesting and revealing.”

“Germs, Genes & Civilizationis a fascinating and well-balanced account of how a wide variety of different kinds of microbes have influenced human evolution, culture, society, and even religious thought. Written for a lay audience, the relationships between genes and disease resistance and susceptibility are clearly discussed, and the book concludes with a sober assessment of what may be in store for us in the future.”

Irwin W. Sherman, Professor Emeritus, University of California, Riverside, and author of Twelve Diseases That Changed Our World and The Power of Plagues

The Stunning Hidden Interconnections Between Microbes and Humanity

AD 452: Attila the Hun stands ready to sack Rome. No one can stop him--but he walks away. A miracle? No...dysentery. Microbes saved the Roman Empire. Nearly a millennium later, the microbes of the Black Death ended the Middle Ages, making possible the Renaissance, western democracy, and the scientific revolution. Soon after, microbes ravaged the Americas, paving the way for their European conquest.

Again and again, microbes have shaped our health, our genetics, our history, our culture, our politics, even our religion and ethics. This book reveals much that scientists and cultural historians have learned about the pervasive interconnections between infectious microbes and humans. It also considers what our ongoing fundamental relationship with infectious microbes might mean for the future of the human species.

The “good side” of history’s worst epidemics

The surprising debt we owe to killer diseases

Where diseases came from...

...and where they may be going

Children of pestilence: disease and civilization

From Egypt to Mexico, from Rome to China

How microbes can shape cultural cycles of puritanism and promiscuity

David Clark was born June 1952 in Croydon, a London suburb. After winning a scholarship to Christ’s College, Cambridge, he received his Bachelor of Arts degree in 1973. In 1977, he earned his Ph.D. from Bristol University for work on antibiotic resistance. David then left England for postdoctoral research at Yale and then the University of Illinois. He joined the faculty of Southern Illinois University in 1981 and is now a professor in the Microbiology Department. In 1991, he visited Sheffield University, England, as a Royal Society Guest Research Fellow. The U.S. Department of Energy funded David’s research into the genetics and regulation of bacterial fermentation from 1982 till 2007. David has published more than 70 articles in scientific journals and graduated more than 20 masters and Ph.D. students. David is the author of Molecular Biology Made Simple and Fun, now in its third edition, as well as three more serious textbooks.

1. Germs, Genes, & Civilization: How Epidemics Shaped Who We Are Today

2. Germs, Genes, & Civilization: How Epidemics Shaped Who We Are Today

3. Germs, Genes, & Civilization: How Epidemics Shaped Who We Are Today (FT Press Science)