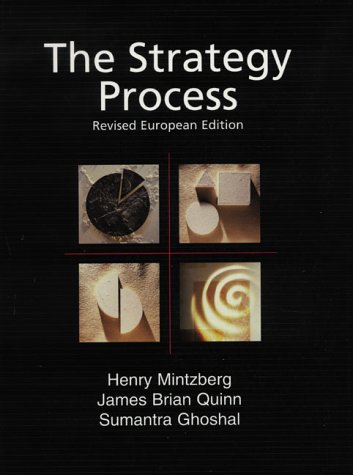 The book maintains the basic outline of the previous editions but components have been replaced and revised to make a book more relevant to the European audience.

Henry Mintzberg is Cleghorn Professor of Management Studies at McGill University in Montreal, Canada. His research has dealt with issues of general management and organizations, focusing on the nature of managerial work, forms of organizing, and the strategy formation process. Currently, he is completing a book about Developing Managers, not MBAs, and a pamphlet entitled Getting Past Smith and Marx . . . Towards a Balanced Society. He is also promoting the development of a family of masters programs for practicing managers. His own teaching activities focus on ad hoc seminars for managers and work with doctoral students.

Joseph Lampel is Professor of Strategy at City University Business School, London. He received his doctorate in Strategic Management from McGill University in 1990, and was awarded Best Dissertation Award from the Administrative Science Association of Canada. Following his graduate studies Professor Lampel taught for seven years at the Stern School of Business, New York University. He subsequently moved to the United Kingdom where her held positions at University of St. Andrews and the University of Nottingham. Professor Lampel is the coauthor of The Strategy Safari with Henry Mintzberg and Bruce Ahalstrand. He has published extensively on strategy in management journals, and his articles have also appeared in the Financial Times and Fortune Magazine.

James Brian Quinn. Professor Quinn is a recognized authority in the fields of strategic planning, management of technological change, entrepreneurial innovation, and management of intellect and technology in the services sector. He has received both the Academy of Management's prestigious Outstanding Educator Award and its Book of the Year award (for Intelligent Enterprise).

Sumantra Ghoshal is Professor of Strategic and International Management at the London Business School. He also serves as the Founding Dean of the Indian School of Business in Hyderabad, of which LBS is a partner, and as a member of The Committee of Overseers of the Harvard Business School. Managing Across Borders: The Transnational Solution, a book he coauthored with Christopher Bartlett, has been listed in the Financial Times as one of the 50 most influential management books and has been translated into nine languages. The Differentiated Network: Organizing the Multinational Corporation for Value Creation, a book he coauthored with Nitin Nohria, won the George Terry Book Award in 1997. The Individualized Corporation, coauthored with Christopher Bartlett, won the Igor Ansoff Award in 1997, and has been translated into seven languages. His last book, Managing Radical Change, won the Management Book of the Year award in India. With doctoral degrees from both the MIT School of Management and the Harvard Business School, Sumantra serves on the editorial boards of several academic journals and has been nominated to the Fellowships at the Academy of Management, the Academy of International Business, and the World Economic Forum.

Book Description Financial Times/ Prentice Hall 08/09/1997, 1997. Condition: Very Good. Shipped within 24 hours from our UK warehouse. Clean, undamaged book with no damage to pages and minimal wear to the cover. Spine still tight, in very good condition. Remember if you are not happy, you are covered by our 100% money back guarantee. Seller Inventory # 6545-9780136759843

Book Description Paperback. Condition: Very Good. The book has been read, but is in excellent condition. Pages are intact and not marred by notes or highlighting. The spine remains undamaged. Seller Inventory # GOR001259428

Book Description Prentice Hall, 1998. Condition: Fair. This is an ex-library book and may have the usual library/used-book markings inside.This book has soft covers. In fair condition, suitable as a study copy. Seller Inventory # 8075984

Book Description Prentice Hall, 1998. Condition: Poor. This is an ex-library book and may have the usual library/used-book markings inside.This book has soft covers. With usual stamps and markings, In poor condition, suitable as a reading copy. Seller Inventory # 8181811

Book Description Financial Times/ Prentice Hall, 1999. Condition: Poor. This is an ex-library book and may have the usual library/used-book markings inside.This book has soft covers. In poor condition, suitable as a reading copy. Please note the Image in this listing is a stock photo and may not match the covers of the actual item,2050grams, ISBN:9780136759843. Seller Inventory # 7828811

Book Description Financial Times/ Prentice Hall, 1997. Condition: Fair. This is an ex-library book and may have the usual library/used-book markings inside.This book has soft covers. In fair condition, suitable as a study copy. Please note the Image in this listing is a stock photo and may not match the covers of the actual item,1800grams, ISBN:9780136759843. Seller Inventory # 8265439

Book Description -. Paperback. Condition: Very Good. The Strategy Process, 2nd Ed. This book is in very good condition and will be shipped within 24 hours of ordering. The cover may have some limited signs of wear but the pages are clean, intact and the spine remains undamaged. This book has clearly been well maintained and looked after thus far. Money back guarantee if you are not satisfied. See all our books here, order more than 1 book and get discounted shipping. Seller Inventory # 7719-9780136759843