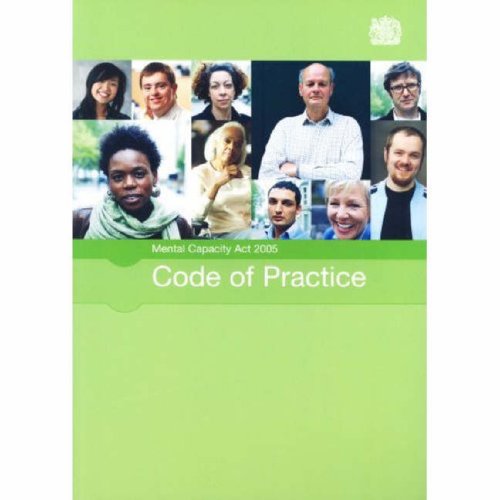 The Mental capacity Act 2005 provides a statutory framework for people who lack the capacity to make decisions for themselves, or for people who want to make provision for a time when they will be unable to make their own decisions. This code of practice, which has statutory force, provides information and guidance about how the Act should work in practice. It explains the principles behind the Act, defines when someone is incapable of making their own decisions and explains what is meant by acting in someone's best interests. It describes the role of the new Court of Protection and the role of Independent Mental Capacity Advocates and sets out the role of the Public Guardian. It also covers medical treatment and the way disputes can be resolved.

The Mental Capacity Act 2005 creates statutory provisions to empower and protect vulnerable people who lack the mental capacity to make their own decisions. Issued on 23 April 2007, the Code of Practice provides guidance on how the provisions of the Act will work on a daily basis for those caring for, or working with, people lacking mental capacity. The Code is important for professionals - such as doctors and social workers - but family, friends, and unpaid carers will also find it helpful. While certain groups of people are legally required to have regard to the Code when acting or making decisions on behalf of people lacking capacity, those who are not legally required to have regard to the Code are still encouraged to use it as a good practice guide. The Code incorporates good practice and case studies, and demonstrates how the principles of the Act can be applied flexibly in particular circumstances. Please note: "The Mental Capacity Act 2005 Code of Practice" (2007 Final Edition) has superceded "The Mental Capacity Act 2005 Code of Practice" (2007 Draft Edition) (ISBN 0117037346 - out of print, no longer available to purchase).