Items related to Poisonous Plants and Fungi in Britain. Animal and Human... 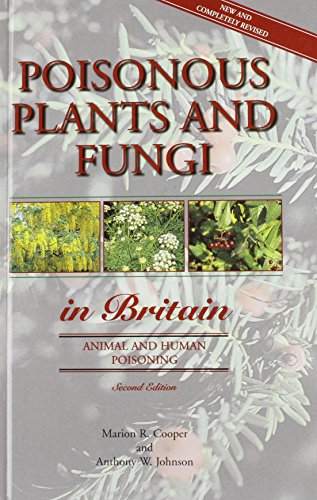 In preparing this edition a complete revision of the whole subject has been made and every part of the book updated, modified, or extended as necessary. This has been a major undertaking that has involved the use of several databases and very extensive literature searches. From the searches any items that seemed likely to be relevant were obtained and consulted, so that almost all of the information presented is taken directly from original publications in scientific journals, specialist books, conference proceedings, etc (ie primary sources); recourse was made to secondary sources (such as books on plant and fungal poisoning from other parts of the world) only in the absence of these.

This new edition is more comprehensive, as most of the 1150 references in the first edition have been retained and about 700 new ones added. Thus the book provides the background as well as the latest information on poisoning by wild plants, crop plants, garden plants, fungi, and mycotoxins; algal toxins are included for the first time. Coverage of the subject has been increased by adding to most families a new section giving brief details of other plants that are of potentially toxicological significance in Britain. In the previous edition the main emphasis was on poisoning in animals, but there is now greater emphasis than before on human poisoning, with some mention of skin contact. A consequence of this is that more information is included on the possible effects of garden and house plants. The problem of identification of plants has been addressed by the inclusion of 60 more photographs than in the first edition, and by a description of an image-based computer system designed for the purpose.

This is an impressive, good-quality text with many illustrations and photos of poisonous plants and fungi, meant for everybody interested in the subject.

Book Description Condition: Good. A+ Customer service! Satisfaction Guaranteed! Book is in Used-Good condition. Pages and cover are clean and intact. Used items may not include supplementary materials such as CDs or access codes. May show signs of minor shelf wear and contain limited notes and highlighting. Seller Inventory # 0112429815-2-4

3. Poisonous Plants and Fungi in Britain. Animal and Human Poisoning

Book Description Condition: Good. This is an ex-library book and may have the usual library/used-book markings inside.This book has hardback covers. In good all round condition. No dust jacket. Please note the Image in this listing is a stock photo and may not match the covers of the actual item,1200grams, ISBN:9780112429814. Seller Inventory # 9080411