Items related to Report of the Royal Commission on the National Health...

Report of the Royal Commission on the National Health Service (Cmnd) 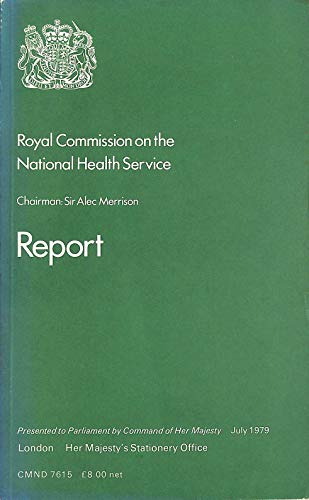 "The Royal Commission on Criminal Justice" was set up in March 1991 with the primary task of recommending changes to the criminal justice system to prevent further miscarriages of justice. This report takes a much broader view of the Commission's remit; its recommendations are aimed as much at reducing the risk of the guilty being acquitted as at trying to prevent the conviction of the innocent. Three hundred and eighty two recommendations are made by the Commission, covering police investigations, safeguards for suspects, the "right of silence" and confession evidence, the prosecution, pre-trial procedures in the Crown Court, the trial, forensic science and other expert evidence, the court of appeal and correction of miscarriages of justice.

Book Description Paperback. Condition: Good. The book has been read but remains in clean condition. All pages are intact and the cover is intact. Some minor wear to the spine. Seller Inventory # GOR003805438

Book Description Paperback. Condition: Very Good. The book has been read, but is in excellent condition. Pages are intact and not marred by notes or highlighting. The spine remains undamaged. Seller Inventory # GOR005193568

Book Description Stationery Office Books, 1979. Condition: Good. This is an ex-library book and may have the usual library/used-book markings inside.This book has hardback covers. In good all round condition. Re-bound by library. Please note the Image in this listing is a stock photo and may not match the covers of the actual item,900grams, ISBN:0101761503. Seller Inventory # 5942250

5. Royal Commission on the National Health Service: Report : Presented to Parliament by Command of Her ajesty July 1979