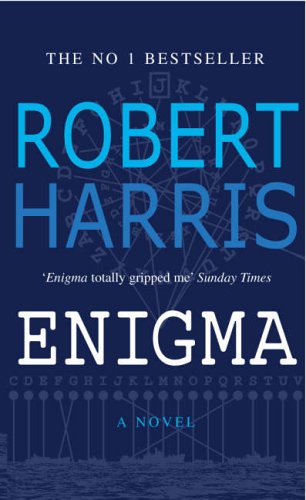 Bletchley Park: the top-secret landmark of World War Two, where a group of young people were fighting to defeat Hitler, and win the war. March 1943, the Second World War hangs in the balance, and at Bletchley Park a brilliant young codebreaker is facing a double nightmare. The Germans have unaccountably changed their U-boat Enigma code, threatening a massive Allied defeat. And as suspicion grows that there may be a spy inside Bletchley, Jericho's girlfriend, the beautiful and mysterious Claire Romilly suddenly disappears.

A gripping World War II mystery novel with a cryptographic twist, Enigma's hero is Tom Jericho, a brilliant British mathematician working as a member of the team struggling to crack the Nazi Enigma code. Jericho's own struggles include nerve-wracking mental labour, the mysterious disappearance of a former girlfriend, the suspicions of his coworkers within the paranoid high-security project, and the certainty that someone close to him, perhaps the missing girl, is a Nazi spy. The plot is pure fiction but the historical background, Alan Turing's famous wartime computing project that cracked the German U-boat communications code, is real and accurately portrayed. Enigma is convincingly plotted, forcefully written, and filled with well-drawn characters; in short, it's everything a good techno-mystery should be. --James Early

"The brilliance of Enigma is that it gives readers the sense of being contemporary with its characters and then leads them on a dark journey of discovery to arrive at another of the Second World War's blackest horror stories, one not fully admitted until half a century later... Altogether top-class stuff. Peter Millar" (The Times)

"After the resounding success of his first novel, Fatherland, the question was what would Robert Harris do for an encore? This is his resounding answer" (Mail on Sunday)

"Extraordinarily good... undoubtedly the best thriller of the year, and perhaps of several years to come" (Evening Standard)

"I finished the book regretful it had ended, and full of wonder at this extraordinary world, people and achievements it evoked" (Observer)