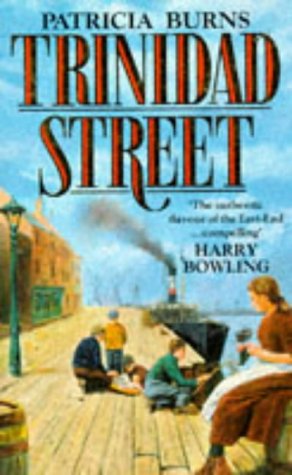 The Isle of Dogs at the turn of the century was a close-knit community. Here in Trinidad Street, the lives and loves of four families tangle and interweave...When Tom Johnson, a union leader at the docks is sacked and set upon, his daughter Ellen has to leave school and her dreams of an office job. But she can still dream of Harry Turner...But Harry, a young lighterman struggling to keep his battered family together, is bewitched by silver-tongued beauty Siobhan O'Donoghue. And Siobhan, ambitious for greater things, will use any weapon to repay the people of Trinidad Street for her disappointments. And Gerry Billingham, if he doesn't go a deal too far in pursuit of a retail empire, will be there to pick up the pieces ...Through good times and bad, from the coronation of Edward VII to the dock strike, some will find what they are looking for - and Ellen and Harry realise too late what they have lost.

Patricia Burns was born in Essex. After a childhood spent messing about on boats, she tried a variety of jobs riveting plugs to serving in shops to market research. She then decided to train as a teacher, which she now combines with writing novels. In her rare spare time she enjoys lazing in the garden and entertaining friends, with the occasional bout of skiing, rock climbing and Egyptian Raqs and Sharki dancing. She is now very happily single and skill lives in Essex with her three children, a cat and delinquent tortoise.

In the close-knit community of the Isle of Dogs, cut off from the rest of London by the Thames and the West India Docks, the lives and loves of four families tangle and interweave through good times and bad, from the coronation of Edward VII to the dock strike and measles epidemic of 1911-12.