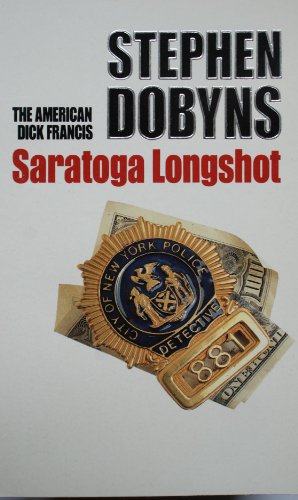 For the sake of an old girl friend, Charlie Bradshaw, a Saratoga Springs police sergeant, agrees to go to New York City to investigate the disappearance of her son, a petty drug dealer

This crime novel centres around the character of Charlie Bradshaw and his search for Sam, son of Charlie's tenth grade sweetheart and quite possibly Charlie's own son. Sam has got involved in a big-time drug deal and everyone from Sam to the police, wishes Charlie would return to Saratoga. Stephen Dobyns other Charlie Bradshaw mysteries are "Saratoga Snapper", "Saratoga Swimmer", "Saratoga Headhunter" and "Saratoga Bestiary" and his other novels are "Dancer With One Leg" and "Cold Dog Soup".

Book Description Arrow Books Ltd, 1990. Paperback. Condition: Used; Good. Dispatched, from the UK, within 48 hours of ordering. This book is in good condition but will show signs of previous ownership. Please expect some creasing to the spine and/or minor damage to the cover. Aged book. Tanned pages and age spots, however, this will not interfere with reading. Damaged cover. The cover of is slightly damaged for instance a torn or bent corner. Seller Inventory # CHL6383886

Book Description Arrow Books Ltd, 1990. Paperback. Condition: Fair. A readable copy of the book which may include some defects such as highlighting and notes. Cover and pages may be creased and show discolouration. Seller Inventory # GOR005702254

Book Description Arrow Books Ltd, 1990. Paperback. Condition: Very Good. The book has been read, but is in excellent condition. Pages are intact and not marred by notes or highlighting. The spine remains undamaged. Seller Inventory # GOR003038158

Book Description Arrow Books Ltd, 1990. Paperback. Condition: Good. The book has been read but remains in clean condition. All pages are intact and the cover is intact. Some minor wear to the spine. Seller Inventory # GOR003655325