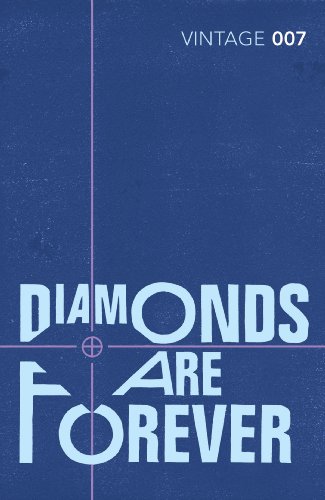 From the diamond mines of Sierra Leone to the jewellers of Hatton Garden, from race track to casino, Bond must infiltrate and destroy the criminal network of the Spangled Mob in Fleming’s fourth 007 adventure.

Diamonds Are Forever, Ian Fleming's fourth Bond novel, has all the hallmarks of a classic 007 adventure and whilst it lacks some of the strength and depth of other books in the series it nevertheless has much to recommend it. The plot concerns a ruthless syndicate known as the Spangled Mob who are running a diamond smuggling pipeline out of Africa into the USA. This is costing England millions of pounds and James Bond is sent to investigate. A promising set up, but it soon becomes apparent that the syndicate's only aim is to get rich and as Bond novels go it is slightly disappointing that this is the sum total of the villains' project.

On a more positive note, Tiffany Case is an excellent Bond girl who plays an integral part in the book. The relationship that develops between her and Bond is highly convincing and well-observed and the book is rich in dialogue between the two. On the topic of marriage:

Bond: "Most marriages don't add two people together. They subtract one from the other."

Tiffany: "But it depends what you want it to add up to. Something human or something inhuman. You can't be complete by yourself."

As suggested by the syndicate's comparatively (in Bond terms) modest ambitions, Diamonds Are Forever lacks a really good principle villain, but it does have well-portrayed minor contenders in the form of the duo Wint and Kidd, two violent and ruthless killers. There are some tense moments in the novel and although there is no real action until well over half way through it, once it starts, it is almost non-stop until the end.

One of the outstanding features of this adventure remains the way Fleming wrote the character of Tiffany. Her relationship with Bond adds humanity and life to Diamonds Are Forever. --Jamie Campbell

"The remarkable thing about this book is that it is written by an Englishman. The scene is almost entirely American and it rings true to an American. I am unaware of any other writer who has accomplished this" (Raymond Chandler)

"Once again Ian Fleming has brought it off" (Birmingham Post)

Book Description Vintage Publishing, United Kingdom, 2012. Paperback. Condition: New. Language: English. Brand new Book. Enter Bond fan territory with one of Fleming's best loved stories. 'The twentieth century looked out at him from the piece of newsprint and bared its teeth in a sneer'From the diamond mines of Sierra Leone to the jewellers of Hatton Garden, from race track to casino, Bond must infiltrate and destroy the criminal network of the Spangled Mob in Fleming's fourth 007 adventure. Seller Inventory # AAZ9780099576884

Book Description Vintage. Condition: New. 2012. 3rd Vintage Impression. Paperback. 'The twentieth century looked out at him from the piece of newsprint and bared its teeth in a sneer' From the diamond mines of Sierra Leone to the jewellers of Hatton Garden, from race track to casino. Num Pages: 336 pages. BIC Classification: FHD. Category: (G) General (US: Trade). Dimension: 198 x 131 x 22. Weight in Grams: 238. . . . . . Books ship from the US and Ireland. Seller Inventory # V9780099576884