Items related to Twenty Thousand Streets Under The Sky

Twenty Thousand Streets Under The Sky 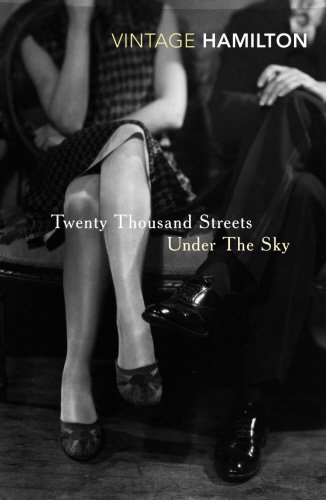 The Midnight Bell, a pub on the Euston Road, is the pulse of this brilliant and compassionate trilogy. It is here where the barman, Bob, falls in love with Jenny, a West End prostitute who comes in off the streets for a gin and pep. Around his obsessions, and Ella the barmaid's secret love for him, swirls the sleazy life of London in the 1930s. This is a world where people emerge from cheap lodgings in Pimlico to pour out their passions, hopes and despair in pubs and bars - a world of twenty thousand streets full of cruelty and kindness, comedy and pathos, wasted dreams and lost desires.

Patrick Hamilton was just twenty-four years old when The Midnight Bell was first published in 1929, but his writing told a different story. The narrative he told was, give or take, his own and was of a young man (Euston Road barman Bob) impossibly in love with one of London's "lovely ladies" (Jenny), an infatuation which tore him apart emotionally, and led him steadily from pub to pub to dosshouse. While Hamilton the man managed to extricate himself from his affair and get married, over the next few years Hamilton the writer returned compulsively to the same materials, manipulating unresolved subplots and highlighting minor characters to produce The Siege of Pleasure in 1932 and The Plains of Cement in 1934. Together the three novels form a many-layered and remarkable trilogy, now happily available again in paperback. They conjure brilliantly twenties Britain, emotionally paralysed by class fears and genteel snobbery, but by now completely unable to regain the social certainties of the past. Hamilton captured the psychological complexity of his career losers with a theatricality which would later find full expression in his stage plays (later filmed), Rope and Gaslight. Many writers since have probed into the capital's lowlife, but probably nobody will ever capture so well the twilight tyranny of the London pub, and its denizens' unspeakable desperation. --Alan Stewart

"Patrick Hamilton wrote about pubs better than any other novelist... The wonderful 1935 trilogy, Twenty Thousand Streets Under the Sky, is set in a pub off the Euston Road. Every detail is spot on" (Independent on Sunday)

"Patrick Hamilton was a writer's writer.... Seen as touchstones by authors from J.B. Priestley to Iain Sinclair" (The Times)

"Hamilton writes about street life with an honesty and lyricism, an absence of sentimentality or fetish for squalor, that should make nearly every hard-boiled writer hang his or her head in shame" (Charles Taylor Salon)

Buy Used
Condition: Good
Ships from the UK. Used book that... Learn more about this copy

1. Twenty Thousand Streets under the Sky

2. Twenty Thousand Streets Under the Sky

Book Description Paperback. Condition: POOR. Noticeably used book. Heavy wear to cover. Pages contain marginal notes, underlining, and or highlighting. Possible ex library copy, with all the markings/stickers of that library. Accessories such as CD, codes, toys, and dust jackets may not be included. Seller Inventory # 3406093739

3. Twenty Thousand Streets Under the Sky

Book Description Paperback. Condition: Good. A slight tan to page edges Good condition is defined as: a copy that has been read but remains in clean condition. All of the pages are intact and the cover is intact and the spine may show signs of wear. The book may have minor markings which are not specifically mentioned. Most items will be dispatched the same or the next working day. Seller Inventory # wbb0018094948

5. Twenty Thousand Streets Under The Sky

Book Description Paperback. Condition: Very Good. Twenty Thousand Streets Under The Sky (Vintage Classics) This book is in very good condition and will be shipped within 24 hours of ordering. The cover may have some limited signs of wear but the pages are clean, intact and the spine remains undamaged. This book has clearly been well maintained and looked after thus far. Money back guarantee if you are not satisfied. See all our books here, order more than 1 book and get discounted shipping. Seller Inventory # 7719-9780099479161

7. Twenty Thousand Streets Under the Sky

Book Description Paperback. Condition: Very Good. Minor shelf wear Very Good: a copy that has been read, but is in excellent condition. Pages are intact and not marred by notes or highlighting. The spine remains undamaged. Most items will be dispatched the same or the next working day. Seller Inventory # wbb0017713907

9. Twenty Thousand Streets Under The Sky

Book Description Paperback. Condition: Fair. A readable copy of the book which may include some defects such as highlighting and notes. Cover and pages may be creased and show discolouration. Seller Inventory # GOR001528043

10. Twenty Thousand Streets Under The Sky

Book Description Paperback. Condition: Good. The book has been read but remains in clean condition. All pages are intact and the cover is intact. Some minor wear to the spine. Seller Inventory # GOR001225717