Items related to The Spoils of War (Damned S.)

The Spoils of War (Damned S.) 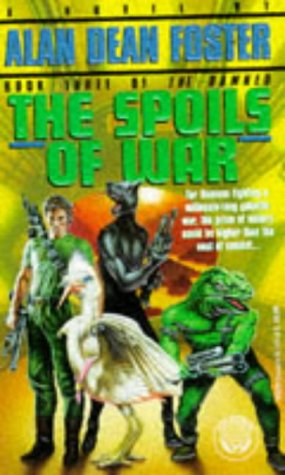 A union of aliens and humans into a force known as the Weave is threatened when the Wais scholar Lalelelang discovers that human beings are incapable of living peacefully. Reprint.

Alan Dean Foster is the author of many SF adventures, the Spellsinger fantasy series and a number of film and TV tie-ins - including the hugely popular Alien novelizations.

s on the verge of winning a decisive victory after a milennia of war, thanks to their new allies from earth. But then the birdlike Wais scholar Lalelang found evidence that Humans might not adapt well to peace. Researching further, she uncovered a secret group of telepathic Humans called the Core, who were on the verge of starting another war, and then eliminating Lalelang. At the last moment, she was saved by a lone Core commander. He took a chance on her intelligence and compassion, and gambled the fate of Humanity on the possibility that together, they could find an alternative to a galaxy-wide bloodbath....

Book Description Paperback. Condition: Good. The book has been read but remains in clean condition. All pages are intact and the cover is intact. Some minor wear to the spine. Seller Inventory # GOR001344208

Book Description Paperback. Condition: Fair. A readable copy of the book which may include some defects such as highlighting and notes. Cover and pages may be creased and show discolouration. Seller Inventory # GOR004791498

3. The Spoils of War

4. The Spoils of War